The 73rd edition of the Monster Energy FIM Motocross of Nations returns home this weekend as the biggest motocross race in the World settles down in The Netherlands, the country where this famous event began way back in 1947.

Besides in 1954 it was the region of Drenthe to be home of MXoN for the very first time and it was organized by Motoclub Assen indeed. Nowadays the Dutch TT circuit which hosted the FIM Motocross World Championship since 2015, and witnessed the 2017 and 2018 MXGP Championship crowning momentshas been transformed into a motocross venue again this weekend to host the 2019 edition of the Monster Energy FIM Motocross of Nations where each country will have 3 talented riders representing their nation in a fight for glory and pride to line up to win the coveted Chamberlain Trophy. 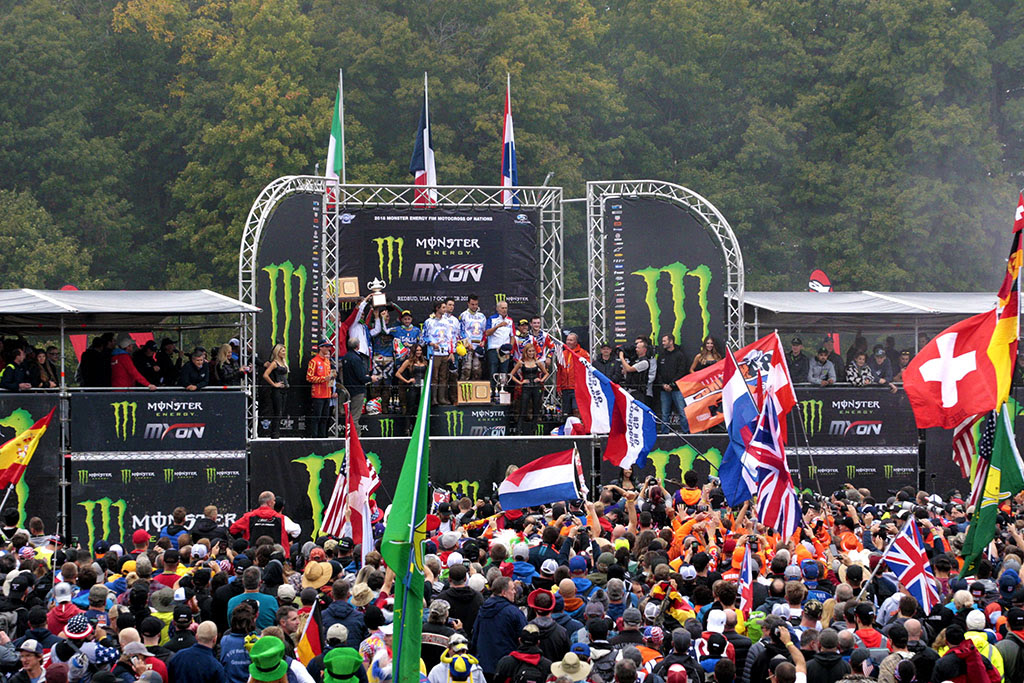 Team France is lining up again this weekend as defending Champions. They’ve been contesting the event since 1947 with 6 wins in total and 16 podiums. Monster Energy Wilvo Yamaha Official MXGP’s Gautier Paulin is leading the way, followed by Team VHR KTM rider Jordi Tixier and Team SM Action Yamaha team’s Maxime Renaux, the three of themrepresent the solid 2019 squad. Despite some latest changes in the line up, these riders still have the capabilities of getting their sixth in a row win and going to Ernèe, France, next year as the champions.

Despite a number of second and third place finishes in the Motocross of Nations, The Netherlands team have never won the Chamberlain trophy, although it looks that might change this weekend. Led by multi-time Motocross World Champion and Red Bull KTM Factory Racing’s Jeffrey Herlings, with last year’s perfect man at Redbud, Standing Construct KTM team rider Glenn Coldenhoff who went 1-1 in 2018 competing the OPEN class and Team HRC Calvin Vlaanderen in MX2, the Dutch are clear favourites. Even do the Monster Energy FIM MXoN is really unpredictable and it doesn’t always reward the favourites with victory Team Netherlands is fully motivated to win its first ever Monster Energy FIM MXoN in History in Assen this September. In 2016 Team Netherlands took its first podium in more than 15 years, repeating the accomplishment in both 2017 and 2018. 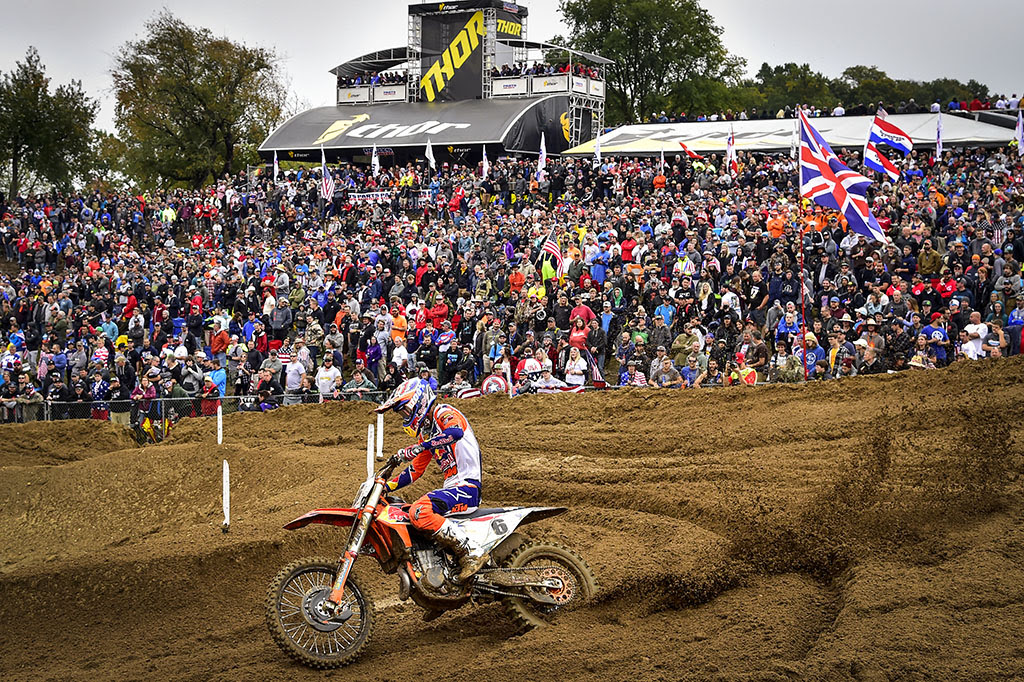 This year Team USA arrive with a different line-up than 2018, however Rockstar Energy Husqvarna Factory Racing’s Zach Osborne, and Jason Anderson and Monster Energy/Star/Yamaha Racing Team rider Justin Cooper, who will enter the Monster Energy FIM Motocross of Nations for the first time,all have put in the hard work to give their team the best chance of victory. Both Osborne and Anderson have arrived early in Europe to prepare for the weekend and along with their previous experience in this event as part of team USA, have a good chance to lift the trophy for the first time since 2011 and score team USA’s 23rdvictory at this legendary race.

Last year’s third placed Team Great Britain come with a good line-up of riders and are clearly a team to watch. Red Bull KTM Factory Racing’s Nathan Watson in MXGP class, F&H Kawasaki rider Adam Sterry in MX2 and RFX KTM rider Shaun Simpson in OPEN are all three capable of riding within the lead riders in their classes. Simpson has a Grand Prix victory at the Assen circuit, and both Sterry and Watson are brilliant sand riders.

Team Belgium is always among the favourites with 15 wins at Motocross of Nations, 11 wins in Trophèe des Nations and 1 win in Coupe de Nations. Last time Team Belgium won the Chamberlain Trophy was back in 2013 while this year with two veterans and the 2019 MX2 bronze medal, they come prepared for battle. SR Honda team rider Jeremy Van Horebeek, and JWR Yamaha’s Kevin Strijbos are seasoned campaigners in the Belgian line-up, while Monster Energy Kemea Yamaha Official MX2’s Jago Geerts experienced his first MXoN in USA last year. Just as they have done so many times before, the Belgian team will make sure they are around the top teams on Sunday night.

Team Italy also selected a well performed team, with Standing Construct KTM team rider Ivo Monticelli at his second MXoN participationcompeting in MXGP, Team Maddii Racing Husqvarna’s Alberto Forato debuting in MX2 at the event and Gebben Van Venrooy Kawasaki’s Alessandro Lupino, who is the most experienced rider with six participations will enter the OPEN category. No doubt Team Italy has to fight for the top positions; missing the Italian hero Red Bull KTM Factory Racing’s Antonio Cairoli they might have a tough weekend, but they will be working just as hard as the other lead nations to make the podium.

Not to forget Team Switzerland with MXGP runner-up Monster Energy Yamaha Factory MXGP team’s Jeremy Seewer, Valentin Guillod and Cyril Scheiwiller have a consistent look about them, they could find a top five finish if their riders all perform to their best. Team Australia, whohave been competing in MXoN since the early 80s, have former Grand Prix rider Dean Ferris in the line-up and two youngster who will experience their first ever Motocross of Nations, Kyle Webster and Regan Duffy.

2019 MXGP World Champion Team HRC’s Tim Gajser will hope he can help Team Slovenia into the Sunday program and with Jan Pancar and Irt Peter backing up the World champion it looks very possible. All eyes this weekend are also on Red Bull KTM Factory Racing’s Jorge Prado, the MX2 World champion from Team Spain because of his debut in 450cc in MXGP class after he won the MX2 overall last year in RedBud. Marchetti KTM’s Iker Larranaga and Carlos Campano rounded up the Spanish Squad.

Notable contenders are also Team Estonia, with the veteran A1M Motorsport team’s Tanel Leok who is attending for the 19thtime, Priit Ratsep and Harri Kullas who have some experience in the team and also big sand skills as well as Team Denmark and Team Latvia. Team Estonia got involved in the event in 1993 for the very first time.

Stefan Kjer Olsen and Vice MX2 Champion Thomas Kjer Olsen entered Team Denmark in MXGP and MX2 classes respectively while Bastian Bogh Damm enters the OPEN class. The first time Denmark contested the Motocross of Nations was in 1951 had the chance to participate in every MXoN since then with only tree exceptions in 2007, 2010 and 2017 with best registered result as a 7th place in 1980. 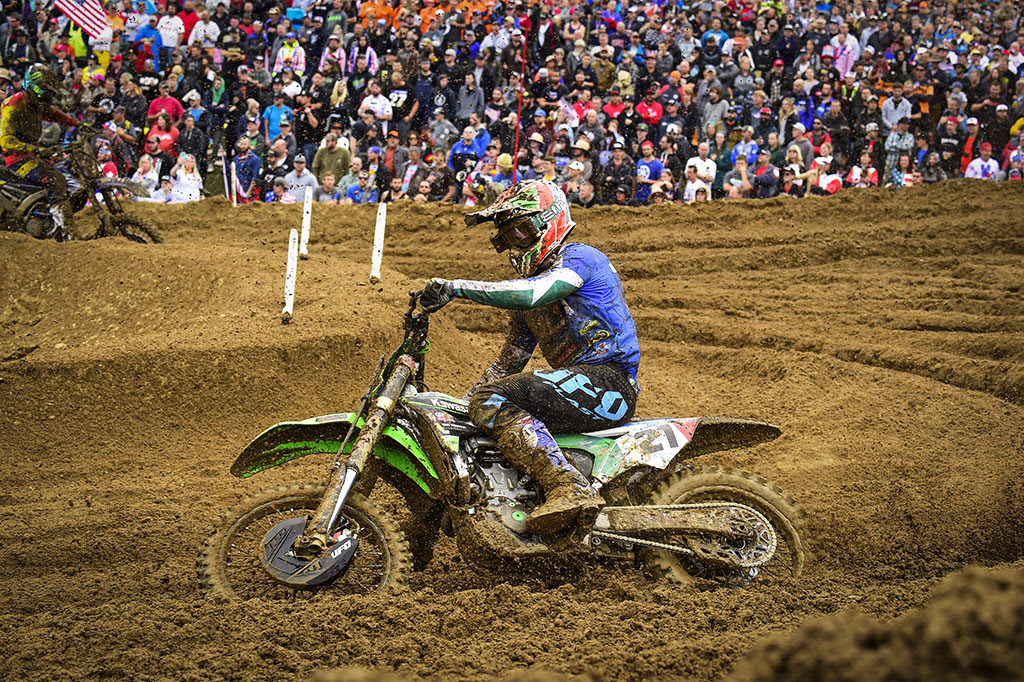 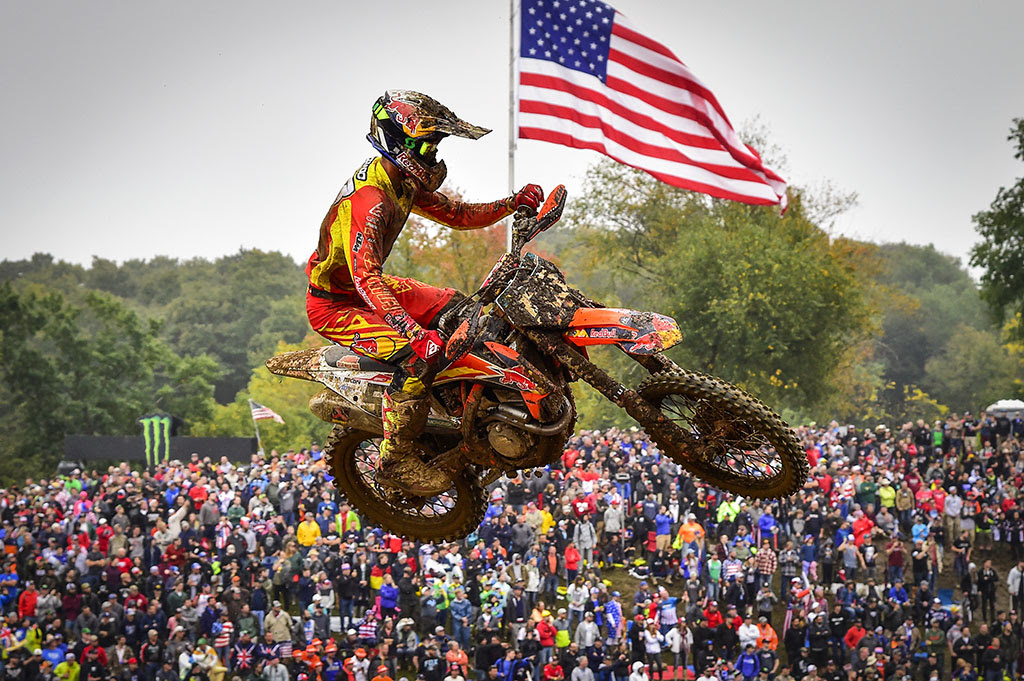 34 Teams will line up this weekend at the sandy track of Assen which will show some slight changes in the layout made on purpose for a weekend which is bound to be epic.