The !5th round of the FIM Motocross World Championship concluded today at the historic circuit of Imola where Team HRC’s Tim Gajser won his third Motocross World Title in his illustrious career and he is now the first one Honda rider who made it. The history in Imola was not just made it by the Slovenian rider as in MXGP Class Standing Construct KTM’s Glenn Coldenhoff won his first GP of the season and Red Bull KTM Factory Racing’s Jorge Prado had in his pockets the victory number 14th out of 15th of 2019. 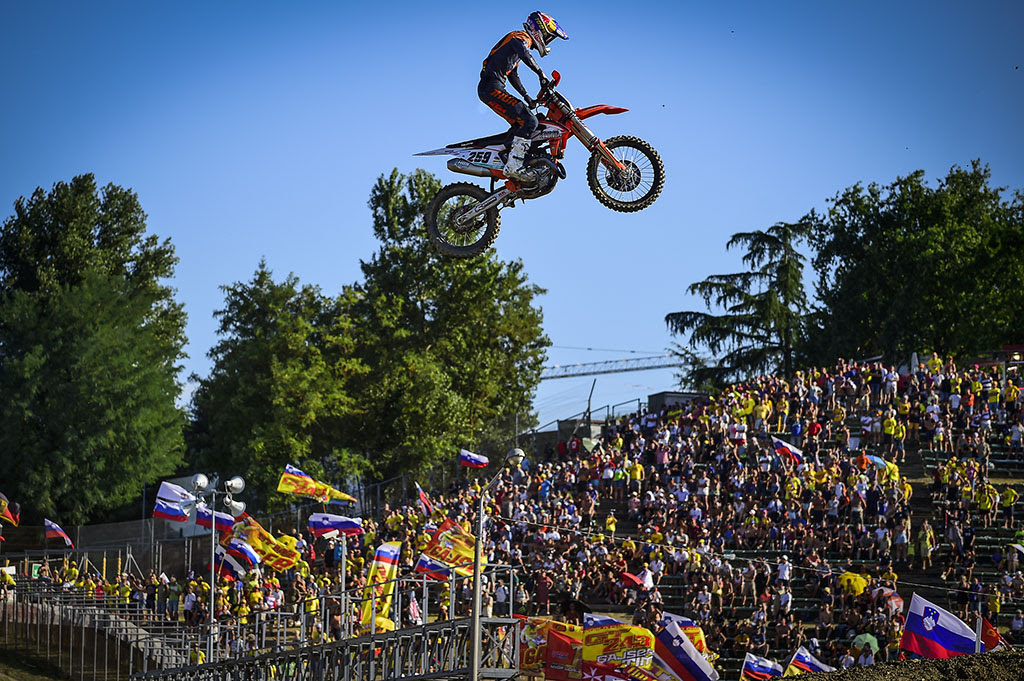 Gajser did not take the easy route as he was pushing hard to get past the two Yamaha’s in front and he moved alongside Tonus, but then lost a spot as he collided with Tonus letting Paulin charge into first and Coldenhoff into second place, Rockstar Energy Husqvarna Factory Racing’s Pauls Jonass was third and Gajser found himself fourth.

Gajser pushed his way past Jonass and was back into third and Coldenhoff was all over Paulin for the lead until he took a wild ride and nearly crashed. Gajser managed to take the second place and Coldenhoff moved into first place.

Jonass passed Gajser and then the drama continued as Gajser crashed and dropped in 8th. Despite the crash the Slovenian was still pushing 100%.

After eight laps Coldenhoff held a lead of nearly eight seconds ahead of Paulin, then came Seewer, Jonass, and Monster Energy Yamaha Factory MXGP team’s Romain Febvre in fifth place. Febvre moved past Jonass, and then the Latvian made a mistake and Tonus and Gajser also passed the Husqvarna rider. Gajser moved into sixth and started hunting down Tonus and Febvre.

Gajser nearly crashed again as he slipped a little while Febvre went down hard and Paulin, Tonus, and Gajser all passed as Febvre dropped back to 11th place. Coldenhoff eventually won the race from Seewer, Paulin and Tonus as Gajser settled for his fifth but it was enough to win his third Motocross World Championship.

Coldenhoff was again in front of the second MXGP race taking the FOX Holeshot ahead of Seewer, Jonass, Monster Energy Kawasaki Racing’s Tommy Searle, Gajser, Paulin, Febvre, Tonus, Rockstar Energy Husqvarna Factory Racing’s Arminas Jasikonis and Gebben Van Venrooi Kawasaki’s Alessandro Lupino. Coldenhoff controlled the race up front as he was three seconds ahead after three laps. Behind him Seewer was a further two seconds ahead of Jonass and Gajser and Paulin rounded out the top five.

Four laps in and Coldenhoff was five seconds in front, and RFX KTM’s Shaun Simpson made his first appearance in the top ten as he moved into 10th place just behind Lupino. Gajser moved past Jonass, and the top five was Coldenhoff, Seewer, Gajser, Jonass and Paulin.

Seven laps and Coldenhoff extended his lead to seven seconds, then came Seewer, Gajser, Jonass, Paulin and Febvre in sixth place. Simpson suffered some issued as he dropped to 24th and HRC’s Brian Bogers was forced out of the race after a crash.

Gajser moved into second place and both him and Seewer were closing down the lead of Coldenhoff. Seewer was quickly back past Gajser for second, but then Seewer made a mistake and Gajser was relegated the Yamaha rider back to third.

Coldenhoff made some great laps and made his lead nearly 10 seconds on lap 12, with Gajser still second, then Seewer, Jonass and Paulin. In the closing stages of the race Paulin passed Jonass for fourth place and Coldenhoff won race 2 from Gajser and Seewer.

Standing Construct KTM’s Glenn Coldenhoff walked away with the perfect 1-1 results and took the Grand Prix victory. It is the third time the Dutchman has won a Grand Prix, adding to his MX2 win in 2013 and his MXGP win in 2015. Second overall was Jeremy Seewer of the Monster Energy Yamaha Factory MXGP team with 2-3 scores. While Team HRC’s Tim Gajser didn’t win the MXGP of Italy today at the magnificent Imola facility, it was the big picture that counted, and his 5-2 results were enough to secure third overall and more importantly the 2019 MXGP championship.

Glenn Coldenhoff: “I won a race and the overall in 2015, but now going 1-1 here it is amazing and I wish to thank my team. We had a tough time and a lot of negatives, but now I’m happy and my boss too. I won my first GP with him and also my third today. It means a lot. I never got 1-1 in the MXGP class and I want to thank everyone for helping me out.”

Jeremy Seewer: “I had two amazing races, I was consistend and I tried to make zero mistakes. The heat was brutal but we go one step higher every time. I want to thank the team, my fans and my girlfriend.”

Tim Gajser: “It was crazy. I am super happy, and I couldn’t wish for a better season or a team around me. I didn’t sleep a lot last night but today is a big day and I tried to take this race the same as all the others. I was fast in the first race even if I didn’t have the best start but I got to second and tried to win the race, but I was quite nervous and I couldn’t. Second race was better. I’m really happy to finish on the podium and to get the 2019 MXGP Title. Also, I want to thank my family and my girlfriend, and all the fans who follow me.” 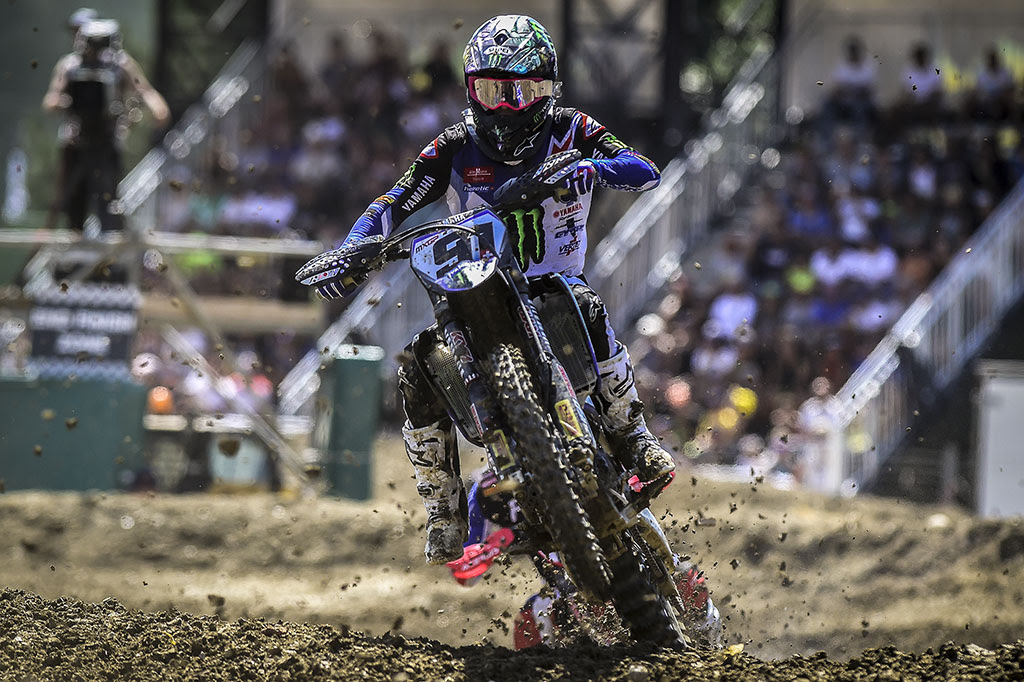 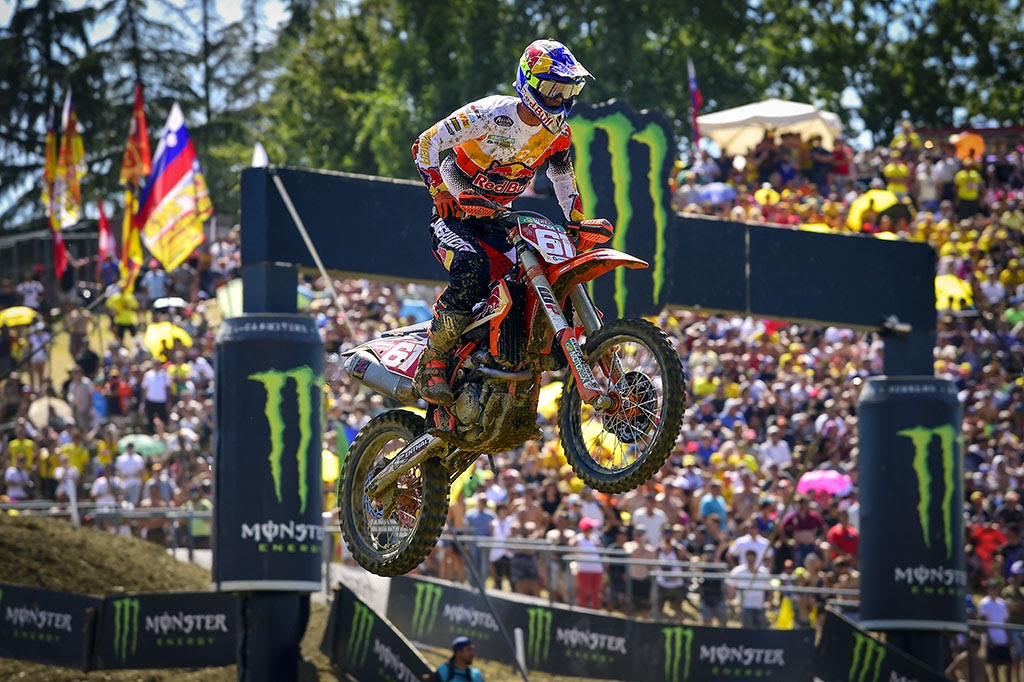 After a lap Sanayei continued to lead and Prado was all over him, with Vialle also close in third place. Prado moved into the lead in the waves section and the same time Vialle dropped out of the top ten as he cruised around the circuit after a crash. Vialle was forced to retire from the race.

Vlaanderen moved into the top ten on lap six, and SM Action Yamaha’sMaxime Renaux moved up to fourth position. Geerts also moved up in sixth place while Prado was still leading by seven seconds over Olsen. Soon after Renaux moved into third place, Geerts fourth, and Sanayei dropped to ninth as Vlaanderen passed to go into eight position.

After 13 laps the lead by Prado over Olsen was 10 seconds and Renaux in third was 23 seconds off the pace of the leader. Prado won the MXGP of Italy race 1 from Olsen and Renaux.

When the gate dropped for the second MX2 race Geerts took the FOX Holeshot, but Prado again led very quickly from Geerts, Olsen, Larranaga and Vlaanderen. After a lap Prado held a five-second lead over Geerts, and Vialle went down hard and again it was forced out of the race. A lap later the lead was eight seconds and again the Spanish teenager was a league of his own in the MX2 class.

Renaux was on a charge as he moved into fourth place, and F&H Racing Kawasaki team’s Adam Sterry dropped to fifth. On lap seven Prado was nine seconds ahead of Olsen, with Vlaanderen in third, then Renaux, and Geerts fifth. Prado continued to cruise out front and won his 26thrace of the season from Olsen and Vlaanderen.

On GP side it was Red Bull KTM Factory Racing’s Jorge Prado who won, and again with 1-1 scores. Second was Rockstar Energy Husqvarna Factory Racing’s Thomas Kjer Olsen with 2-2 and third Maxime Renaux of the Yamaha SM Action team with 3-4 finishes.

Jorge Prado: “It was an amazing day and yesterday it was very good. We are having a fantastic 2019 season. I’m very happy to get the win and next weekend will hopefully be a good one. I’m very happy to get two races wins and I am really excited. In the first race I got a good start, the first lap I was behind Darian and tried to pass and I made it. I just wanted to be safe out of this race and hopefully we can do the same in the second race.”

Thomas Kjer Olsen: “It was an amazing comeback because Lommel was tough for me. We made some small changes to the bike and I want to thank the team for getting me comfortable. I showed I was back and could push the whole weekend. I want to thank all the people who always support me”

Maxime Renaux: “It is really special getting a podium finish. These last couple of years were though and I hope I’ll keep improving.” 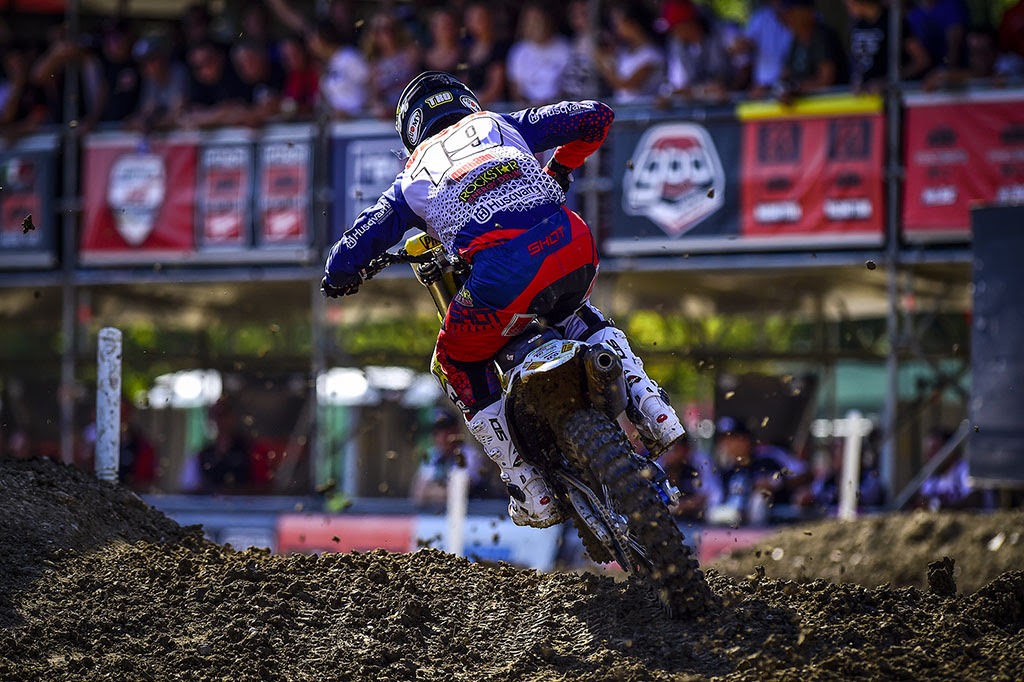 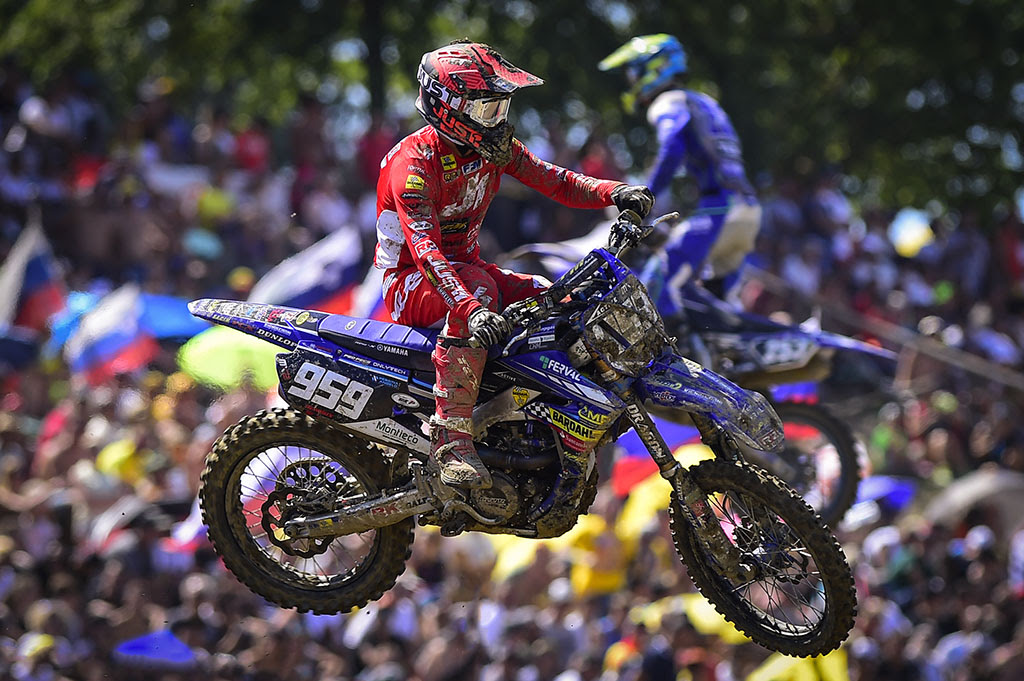