With sunshine and a large Swedish crowd in attendance at the beautifully prepared Uddevalla circuit, another sensational weekend of motocross was played out at the MXGP of Sweden. A Motocross World Champion was crowned as Red Bull KTM Factory Racing’s Jorge Prado took his back-to-back title in MX2 class and two surprising winners went on top of the Podium in the MXGP and MX2 classes as Standing Construct KTM’s Glenn Coldenhoff won his second GP of the season in MXGP and Red Bull KTM Factory Racing’s Tom Vialle combined his 2-2 results for an overall win in MX2. Gajser was all over Herlings, but the Dutchman remained calm and in the lead at this debut after a few weeks off the bike. Gajser went down in a corner and dropped back to fourth place giving Herlings a major lead. After two laps the lead was more than two seconds as Coldenhoff and Febvre battled for second place.

Herlings held the control of the race, but wasn’t getting far away from Coldenhoff while Febvre and Gajser closed in on the Dutch riders while Jonass remained in fifth place. Coldenhoff moved into the lead on lap 10 after Herlings’ mistake and Febvre was also all over Herlings. Febvre and Gajser both went past Herlings, who started to really struggle with arm-pump.

After 12 laps Coldenhoff continued to lead followed by Febvre, Gajser, Jonass, and Herlings in fifth place found himself fighting with Monster Energy Wilvo Yamaha’s Arnaud Tonus for 5th when suddenly Herlings crashed and Tonus ran into him and both went down. Herlings got going again, although Tonus was done for the race as his bike started blowing smoke. Herlings decided to retire from the race.

Coldenhoff and Febvre battled side by side in the last laps but Coldenhoff managed to hang on and he won his third race of the season ahead of Febvre and Gajser.

The second MXGP gate dropped and Febvre took the FOX holeshot followed by Gajser, Tonus, Seewer, Jonass, Monster Energy KRT’s Tommy Searle, Monster Energy Wilvo Yamaha’s Gautier Paulin, Herlings and Coldenhoff. Febvre and Gajser were pushing hard to ensure the lead as the French held only a bunch of seconds lead over the Slovenian after five laps while back in the leading pack Seewer and Coldenhoff battled for fifth place. Finally, on lap nine Coldenhoff moved past Seewer while Gajser was still looking for a way past Febvre.

Gajser went for a wild pass on Febvre, but the Frenchman managed to remain in the lead. In the meantime Herlings managed to reach the sixth position after a start in 8th as Tonus dropped back in the field in 7th. On lap 13 Gajser eventually moved into the lead followed by Jonass, Coldenhoff and Seewer.

JWR Yamaha rider Kevin Strijbos moved into 10th place in the late stages of the race and Herlings was closing up on Seewer for fifth position. Febvre crashed down hard and was forced to a DNF; Febvre has been taken to the hospital for further examinations.

Coldenhoff was all over Jonass in the last lap and was fighting hard for the overall victory. Coldenhoff went through Jonass ensuring a second GP win of the season while Gajser won his 16th race of the season from Coldenhoff and Jonass.

Glenn Coldenhoff: “It was a tough weekend but I’m very satisfied. Jeffrey was in front of me in the beginning of the first race, and it is really difficult and Febvre was close at the end and I got a little nervous, but I kept it on for the win. I’m very happy about my riding now”

Tim Gajser: “I am really happy. The first race I made a mistake and a lost two places. The second race I was pushing Romain and then I thought five minutes before the end I had to pass him, and I took the lead and with one lap to go I was leading the GP, but congratulations to Glenn, he deserved it.”

Pauls Jonass: “You know its been a while since I was on the box and we worked hard to get here. The starts are the key, and they are better now, but we still need to improve them. It feels good to be up front and thanks to Rockstar Energy Husqvarna team and all my sponsors.” 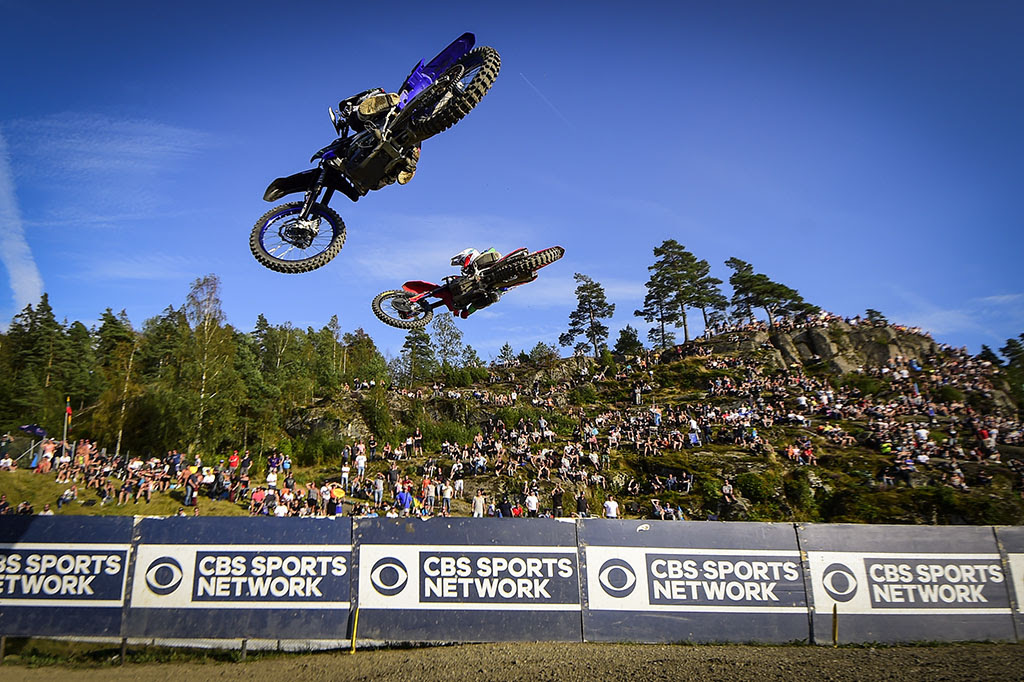 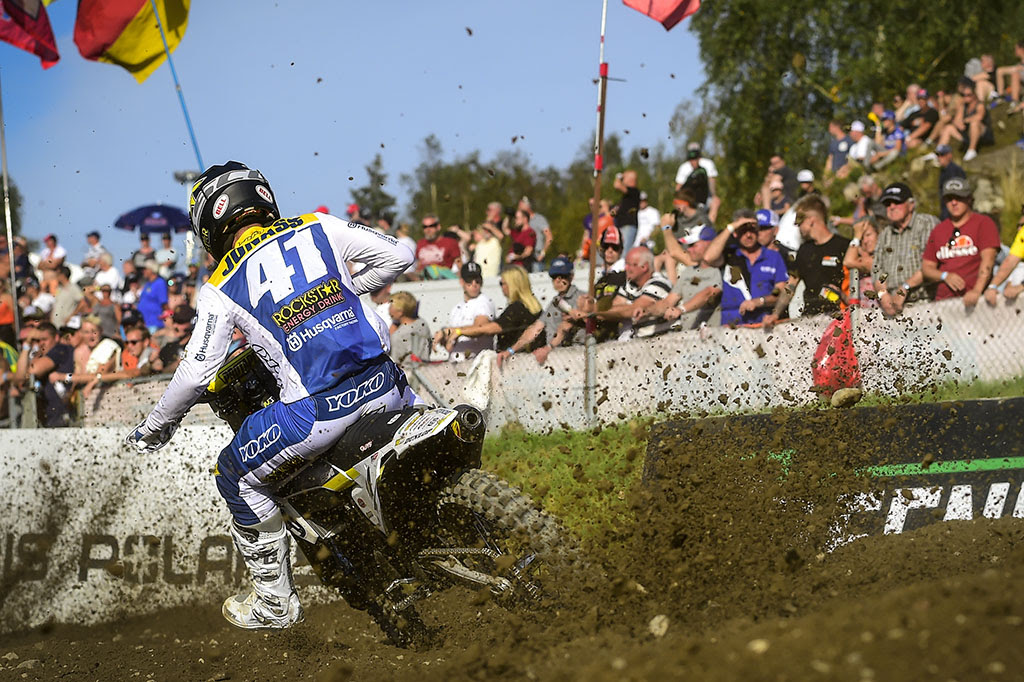 Red Bull KTM Factory Racing’s Jorge Prado led the field into the first lap of the opening MX2 race but it was team-mate Red Bull KTM Factory Racing’s Tom Vialle who took the FOX Holeshot. Behind the two KTM riders were F&H Racing Kawasaki’s Henry Jacobi, Team HRC’s Calvin Vlaanderen, and REVO Husqvarna rider Dylan Walsh in fifth place. Prado quickly pulled away from the pack and Vialle made a gap between himself and Jacobi.

Sanayei nearly crashed and let Vlaanderen go past after the South African rider had lost a few places. Monster Energy Kemea Yamaha Official MX2’s Jago Geerts and Rockstar Energy Husqvarna Factory Racing Thomas Kjer Olsen did not have fantastic starts as they were in 13th and 14th respectively.

Two laps in and the lead was just a second and a half as Vialle tried to keep his team-mate in sight. Third was Jacobi, then Walsh and Vlaanderen while Sterry was riding fonfortable and moved into sixth place and Vlaanderen was back into fourth spot after passing Walsh.

After six laps Prado continued to lead Vialle by a little less than two seconds, as Sterry and SM Action Yamaha’s Maxime Renaux passed Walsh, dropping the New Zealander to seventh place. Geerts went down and dropped back to 16thplace.

Jorge Prado won the first race at the MXGP of Sweden ahead of Vialle and Jacobi and it was enough to ensure his back-to-back title in MX2 with other two rounds left. Jorge Prado had his greatest career results in 2019 as the Spaniard has in his pockets 12 pole positions, 470 laps led, 27 race win and 14 GP win out of 16 rounds at only 18 years old.

After a long celebration on Prado’s second title, the gate dropped for MX2 race 2 and Vialle took the second FOX Holeshot of the day while the American Bike It DRT Kawasaki rider Darian Sanayei led the race from Sterry, Vialle, Prado, and Jacobi. Vialle then moved into the lead in the opening lap, and Prado was just as quickly into third place. After a lap Vialle lead the top five followed by, Sterry, Prado, Sanayei and Vlaanderen but Prado made a mistake and fell in a corner and dropped back to sixth position.

Two laps in and Vialle held a two-second lead over Sterry, with Prado dropping back to eight position as he struggled with the clutch. Vlaanderen moved into third place and Jacobi seemingly picked up an injury out of the race twisting his knee.

Geerts crashed and dropped a bunch of places on lap five and found himself in 11th place while Prado moved up to sixth. On lap nine Sterry and Vlaanderen moved closer to Vialle and the top three battled hard for the race win. Prado moved into fourth place and was 20 seconds off Vialle.

Vlaanderen moved past Sterry and Vialle turned up the heat and moved to five seconds away from the South African. Vlaanderen moved into the lead as Vialle made a mistake and dropped to second. Vlaanderen won his first MX2 race of the season from Vialle and Sterry while Red Bull KTM Factory Racing’s Tom Vialle ensured his first GP win in MX2 with his 2-2 results, Team HRC’s Calvin Vlaanderen was second overall with 4-1 and third was Red Bull KTM Factory Racing and 2019 MX2 Champion Jorge Prado with 1-4.

Tom Vialle: “It is a fantastic weekend I took two holeshots and I got the round win. For sure it is fantastic the first race I pushed and lost a lot of energy and in the second race I took the holeshot and finished second and I won the overall. I did not expect that but it is a great feeling”

Calvin Vlaanderen: “First race I didn’t’ feel really comfortable as I had a bad start but in the second race I rode well and the two guys in front made mistakes and I was able to get the race win. Thanks to the team and my family and girlfriend to support me”

Jorge Prado: “I have no words to explain this. This year has been a great season, winning every single round I rode except this one (laugh). Thanks to everyone who is there everyday with me and supporting me. Two World titles, if you think of it, it is incredible. The second race was one of the best races of the year for me, I came from the back to fourth place and I couldn’t use the clutch because the level was bent.” 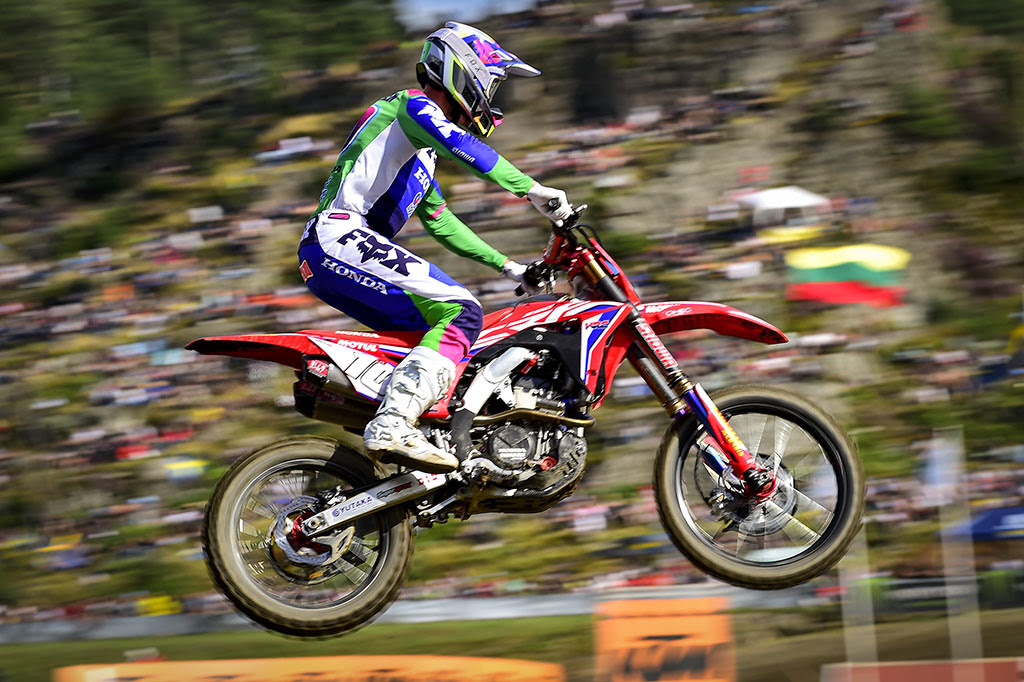 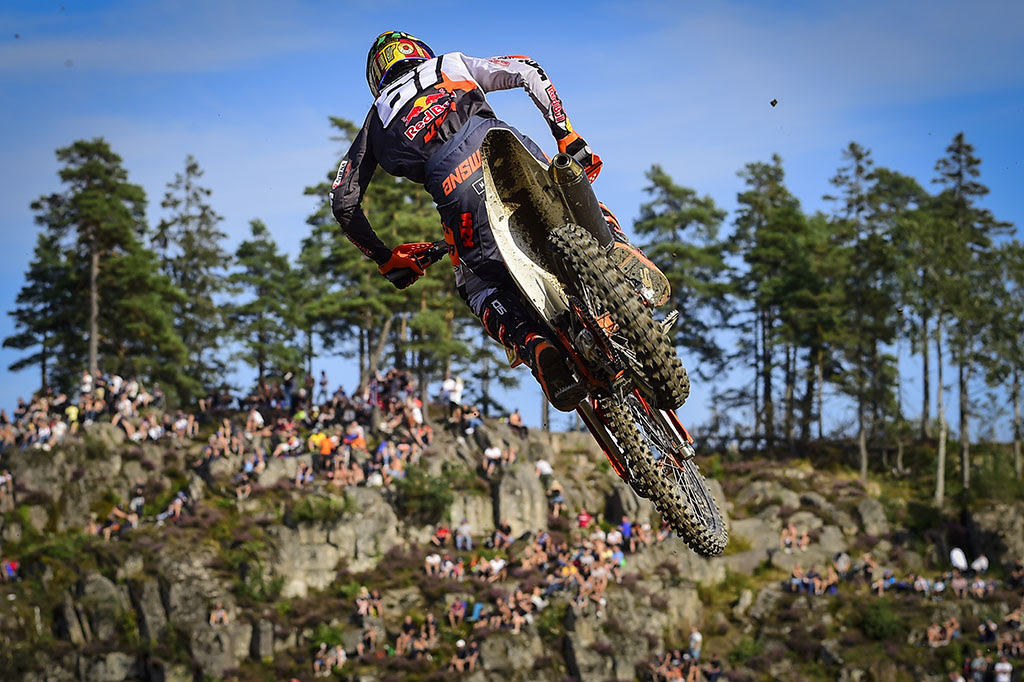 NEXT Round
The 17th round of the FIM Motocross World Championship is set to take place in Afyon, Turkey on September the 8th.