The time has come for the FIM Motocross World Championship to head to the deep sand of Lommel for the MXGP of Flanders-Belgium!

Every season, the Belgian Grand Prix is one of the most talked about races of the year as the track is considered to be the heartland of motocross and has played a vital part in the Motocross World Championship for many years, becoming known as one of the toughest sand circuits in the world.

Many memorable races have taken place in Lommel, including the 1981 Motocross of Nations and total of 18 Grand Prix’s since 1990, including last year’s triple-header!

The MXGP of Flanders-Belgium will be even more exciting this season as the FIM Women’s Motocross World Championship riders will make their very first appearance in Lommel for round two of the championship, as defending world champion Courtney Duncan of Bike it MTX Kawasaki will look to continue her dominant force with another solid result, while Larissa Papenmeier of Yamaha Racing 423 will look to keep the championship gap close, as Nancy Van De Ven and Kiara Fontanesi will look to get themselves on the podium after a tough weekend in Loket.

This weekend’s races will also see round two of the EMX2t Presented by FMF Racing as Fantic Factory Team Maddii’s Maximilian Spies will enter the race in Lommel as the championship leader looking to keep that gap to Verde Substance KTM’s Brad Anderson and his teammate Federico Tuani. Former MXGP rider Ken De Dycker will also make a wildcard appearance in the EMX2t category this weekend, so it will be interesting to see if he can make things interesting for the leaders.

This weekend will be a chance for Team HRC’s Tim Gajser to claw back some valuable championship points that he lost out on in Loket due to the crash in the second race. Last season, Gajser won four of the six races that took place in Lommel during the Belgian triple-header, so entering the races this weekend, he is likely to pick up where he left off last time around.

Of course, there’s a field of riders who won’t make this easy, one of those riders being Red Bull KTM Factory Racing’s Antonio Cairoli who will look to continue his podium streak as he chases his fifth consecutive top three finish. Last time Cairoli was victorious in Lommel was 2014, so a GP victory in the sand is well overdue and it will be interesting to see how he can manage this weekend.

His young teammate, Jorge Prado will aim to make two GP wins on the bounce after his first podium of 2021 in Loket last weekend. Prado has somewhat struggled at the beginning of the year, though it looks like the Spaniard is picking up the pace now, as he proved this in Czech Republic with his race one win and GP victory.

Monster Energy Kawasaki Racing Team’s Romain Febvre will look for redemption in Lommel after some tough races in Oss and Loket. For Febvre staying on two wheels and consistency is the only thing missing, as he’s finding it tough to put together two strong races, which would put him in the fight for the podium and more importantly for the overall.

Monster Energy Yamaha Factory Racing riders Glenn Coldenhoff, Jeremy Seewer and Ben Watson are all within a fighting chance of some top results this weekend and even podium finishes. Last year in Lommel Watson secured two race wins and his first MX2 overall, so no doubt he will have an extra boost of confidence coming back to the circuit this weekend. While his teammate Seewer will enter the Belgian GP off the back of his first podium finish this season which is a big confidence boost for the Swiss who struggled in the beginning of the year.

Rockstar Energy Husqvarna Factory Racing’s Arminas Jasikonis could shine this weekend as the tall Lithuanian has been making great progress in getting back up to speed during the last couple of GP’s. While the races in Loket didn’t deliver on the results Jasikonis would have wanted, we did however see a glimpse of what can be expected in Oss as he rode his way to a top 10 finish for the first time this season.

For Gebben Van Venrooy Racing’s Brent Van Doninck and Kevin Strijbos, along with Beta SDM Corse Motocross Team’s Jeremy Van Horebeek the races this weekend will be extra special, as the trio will want to put on their best performance for their home Grand Prix.

But the biggest talking point as we enter the sand races is whether or not Red Bull KTM Factory Racing’s Jeffrey Herlings will make his return after a shoulder blade injury sustained in Oss. Herlings revealed in an interview with Lisa Leyland that he would want to return for Lommel in order to keep his championship chase alive, though the smart decision would be to return a couple of weeks later. So, it will be interesting to see what decision the team and Herlings make and whether we will see him line-up for the sand race on Sunday. 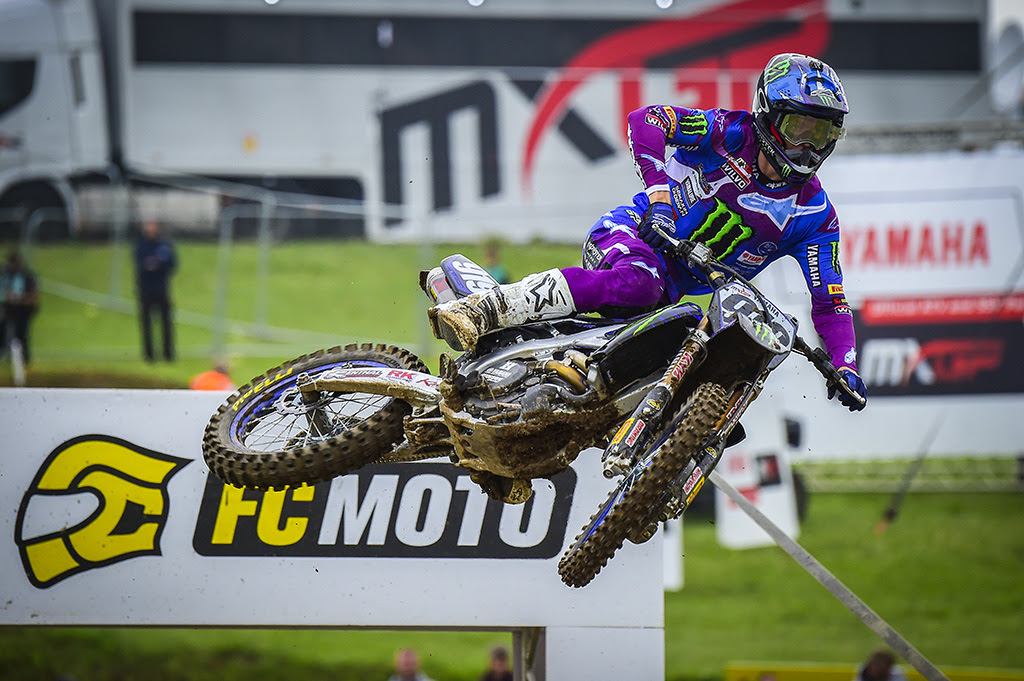 In MX2, Monster Energy Yamaha Factory Racing’s Maxime Renaux will enter the sixth round of the series as the championship leader by just two points over Red Bull KTM Factory Racing’s Mattia Guadagnini who was the overall winner in Loket. There is no doubt both riders will want to do their best this weekend to gain some valuable championship points.

Thibault Benistant from Monster Energy Yamaha Factory Racing is a rider to look out for as he will line-up in Lommel after his maiden MX2 podium in Loket, after a 9-1 result. Last season, Benistant was impressive in the deep sand of Lommel as he chased his EMX250 title, so it will be interesting to see where he will match-up in the sand among the other MX2 riders.

For the third factory Yamaha rider, Jago Geerts, the home Grand Prix this weekend will be another chance for him to have some good races to get himself back on the podium and make his way up the championship standings. Last year the three races in Lommel were a mix for Geerts who struggled to keep it on two wheels, so hopefully this season he will be able to show what he is capable of in the sand.

Meanwhile Red Bull KTM Factory Racing’s Tom Vialle will continue his return after injury. Last week in Loket saw Vialle finish second behind Guadagnini in race one, while in the second race, the Frenchman went down twice and did not finish the race. Hopefully the crashes of last season have not been a set-back in his recovery and he can continue to get back to grips and defend his title.

Finally, Rockstar Energy Husqvarna Factory Racing’s Jed Beaton and Kay De Wolf have been very promising so far this season as the pair have regularly been running at the top end of the field. In the sand race in Oss, the pair were second and third on the podium as they both challenged for race wins, so it will be good to see them do the same this time around.

Missing this weekend will be F&H Kawasaki Racing’s Roan Van De Moosdijk who would’ve been among the favourites for this sand race. The Dutchman unfortunately broke his scaphoid after a crash in Loket and has undergone surgery this week to repair it. 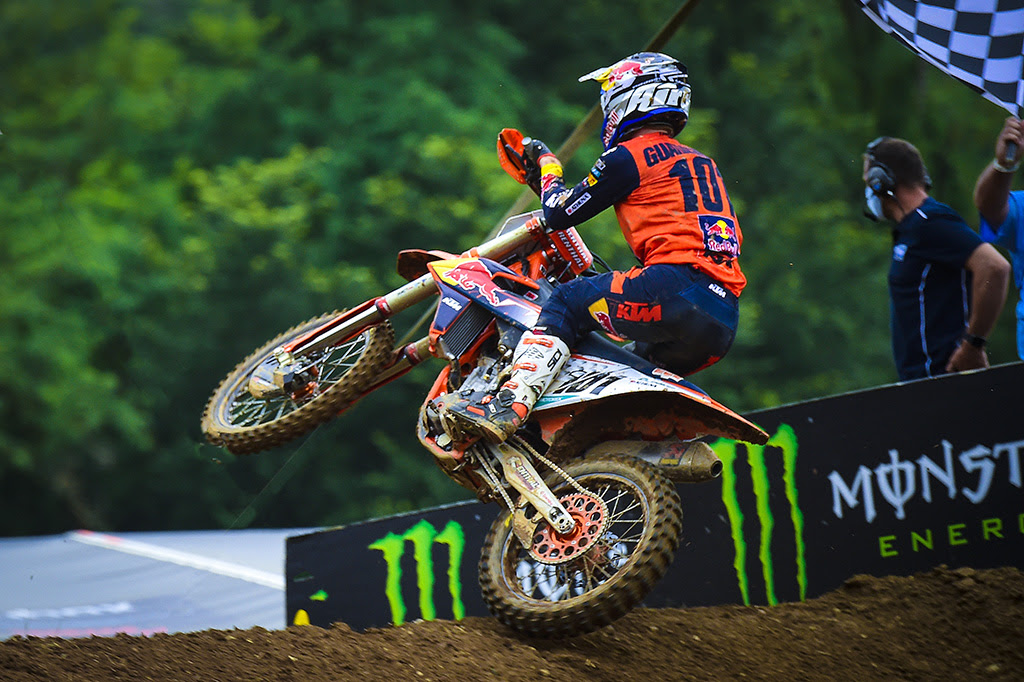