The French grand prix is renowned for it’s crazy fans. Year after year, whether the MXGP of France is held at Villars sous Ecot, Ernée, Saint Jean d’Angely, or even somewhere else in France for that matter, it attracts fans from all walks of life that are onsite at the crack of dawn, enthusiastically ready to watch the best motocross riders in the world do business.

This year, it was the hills of St. Jean d’Angely, the venue most famous for the 2011 Monster Energy FIM Motocross of Nations where Team USA were victorious, that were pumping today, as thousands of rowdy fans bunched up to enjoy the frantic Qualifying Race action here at round ten of the FIM Motocross World Championship where Team HRC’s Evgeny Bobryshev and Red Bull KTM Factory Racing’s Jeffrey Herlings stayed out of trouble on the tricky clay for the qualifying heat wins in their respective classes.

Round four of the FIM Women’s Motocross World Championship also kicked off today with Yamaha’s Nancy Van de Ven taking her second race win of the season, while KTM Silver Action’s Stephen Rubini put on a show for his home fans with a race win in the opening moto here at the fourth round of the European Championship EMX125 presented by FMF Racing.

Guillod made a mistake and went wide allowing Desalle, Paulin and Teillet through, while Tony Cairoli crashed out of the lead. In addition to all of that carnage, Honda Gariboldi’s Tim Gajser looped out massively through the wave section, which looked pretty painful since he landed flat on his back on the rock hard clay.

Gajser remounted in dead last while Cairoli came around on lap two way back in tenth. On lap three, Paulin gave the fans something to lose their minds about when he went hot up the inside of Desalle for the lead and on the following lap Guillod moved into second with exactly the same move.

Just over halfway, Team HRC’s Evgeny Bobryshev found his mojo, passed both Desalle and Guillod, and then started grinding away at the lead of his teammate Paulin. Meanwhile, the world champ, Monster Energy Yamaha Factory Racing’s Romain Febvre also found a way past Desalle and started adding to the hair-raising atmosphere when he exchanged plastic with Guillod, in a battle for third.

With no rider willing to relent, Guillod drove Febvre wide straight into a tough-block but Febvre just used it as a berm and charged right back. In an outright uphill drag, Febvre got a wheel ahead of Guillod and pulled across to secure the spot.

Back up front, Paulin had the crowd smiling as he looked to have his first qualifying heat win of the season in the palm of his hands. Unfortunately, in a dramatic turn of events, the Frenchman hit a slick spot at speed and had the bars ripped out of his hands causing a sickly crash which saw him ragdoll down the track. That was on the final lap, which meant the win was handed to his teammate, Bobryshev, who led Febvre home for his second qualifying heat victory of the year.

Guillod put in a season best qualifying result with third ahead of Desalle and Rockstar Energy Husqvarna Factory Racing’s Max Nagl. Meanwhile Cairoli made a few more mistakes and only came home in eighth while Honda Gariboldi’s Tim Gajser, who was the fastest rider in both practice sessions, only came home in thirteenth. 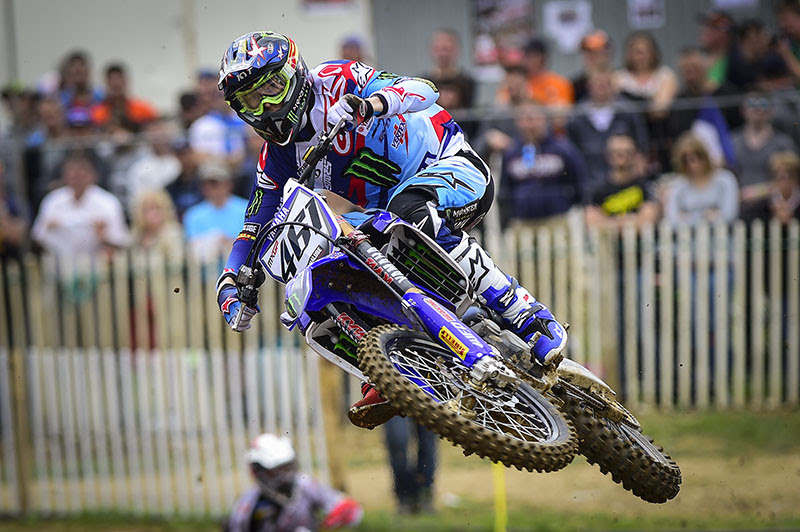 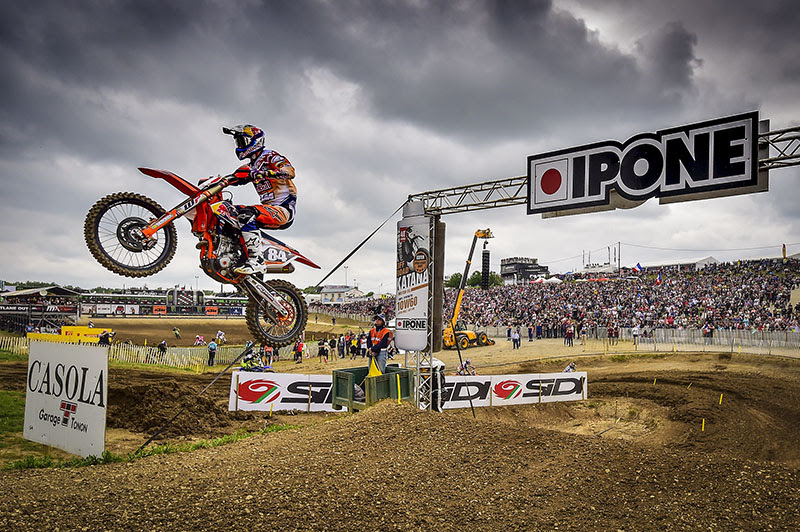 The Red Bull KTM’s of Pauls Jonass and Jeffrey Herlings were definitely ‘ready to race’ as both riders led the way around turn one ahead of the kid fastest in Timed Practice, Monster Energy Kawasaki Racing Team’s Dylan Ferrandis, who was hit by Team Suzuki World MX2’s Jeremy Seewer at turn two.

As a result of tagging Ferrandis, Seewer hit the deck, and Ferrandis bobbled which allowed Wilvo Standing Construct Yamaha Official MX2 Team’s Aleksandr Tonkov to get by for third.

Ferrandis got Tonkov back almost immediately while Herlings dropped his teammate, Jonass, like a stone and checked out for a very emphatic race win. In effort to chase The Bullet, Ferrandis wasted no time in passing Jonass when he out braked him on lap two but didn’t really have anything for Herlings who was gone baby gone.

Meanwhile, Jonass and Tonkov treated the fans to some epic bar-bashing racing as the duo played cat and mouse for third. After a few laps of eating pebbly roost, Tonkov block passed Jonass at the bottom of a hill but in the struggle for traction Jonass ended up getting better drive out of the turn and out dragged the Yamaha rider back up the hill. After that, Tonkov tried a couple more moves on the Latvian but in the end had to settle for fourth.

Tearing up St. Jean for the home fans, Kemea Yamaha Official MX Team’s Benoit Paturel bounced back from an average start for fifth, seven seconds clear of Seewer, who put in an extremely impressive ride for sixth after his crash on lap one.