The Italian circuit of Imola hosted the opening race day of the MXGP of Italy amidst the Italian and Slovenian fans who gathered to cheer their heroes up.

Team HRC’s Tim Gajser continued to be the man in the MXGP class with another solid, mistake free ride today at Imola. The soon to be crowned MXGP champion now goes into Sunday’s races with pole position and no doubt will be hoping to celebrate his third Motocross World Championship after the first race tomorrow. Second and third in the qualifier were Standing Construct KTM’s Glenn Coldenhoff and teammate Ivo Monticelli.

Together with MXGP and MX2 Qualifying races, the opening EMX2T presented by FMF Racing and WMX races were taking place with JK Racing wild card Manuel Iacopi winning his first race but the championship battle is still between Ecomaxx Fuels Mike Kras and Brad Anderson of the Verde Substance KTM team.

Bike It DRT Kawasaki’s Courtney Duncan has won a very eventful opening race for the Women’s Motocross World Championship. The New Zealander led early, only to give the lead to Nancy Van De Ven, before catching and passing the Dutch women, who eventually finished third behind Duncan and German rider Larissa Papenmeier. Duncan now has a 19-point lead in the championship points.

After a lap the lead was less than a second, and Monticelli moved into third place, ahead of Jonass and Paulin. Febvre and Gajser remained close going into the fourth lap and Gajser clocked the quickest lap of the race. Coldenhoff made it for fifth place, with Anstie sixth and Searle losing places fast in 10thplace.

On lap five Gajser took the lead, but Febvre quickly repassed and managed to be back in front. Behind them were Monticelli, Coldenhoff, and Jonass. After eight laps Gajser went for another charge towards Febvre and closed right up to his back wheel, the Slovenian moved into the lead but once again Febvre charged Gajser and made it for first. Back in the pack Seewer was charging Paulin and he managed to go through.

Febvre made a mistake and Gajser passed him while Monticelli moved into second place for a moment and Gajser pulled to nearly three seconds away from those two. Soon after Coldenhoff also started pushing Febvre and moved past on lap 10.

Coldenhoff, who is in great form at the moment, moved into second place, relegating Monticelli to third, then came Febvre and Anstie. Tim Gajser won his sixt qualifying race of the season from Coldenhoff and Italian sensation Ivo Monticelli.

Gebben Van Venrooy Kawasaki’s Alessandro Lupino had a good start but he could not finish the race due to issues on his exhaust pipe.

Tim Gajser: “I’m really happy for my qualifying racer, I was feeling very good, the track is gnarly, and I liked it. I had a nice battle with Romain (Febvre), and I enjoyed that because it was clean, and I look forward to tomorrow. It’s going to be a special day” 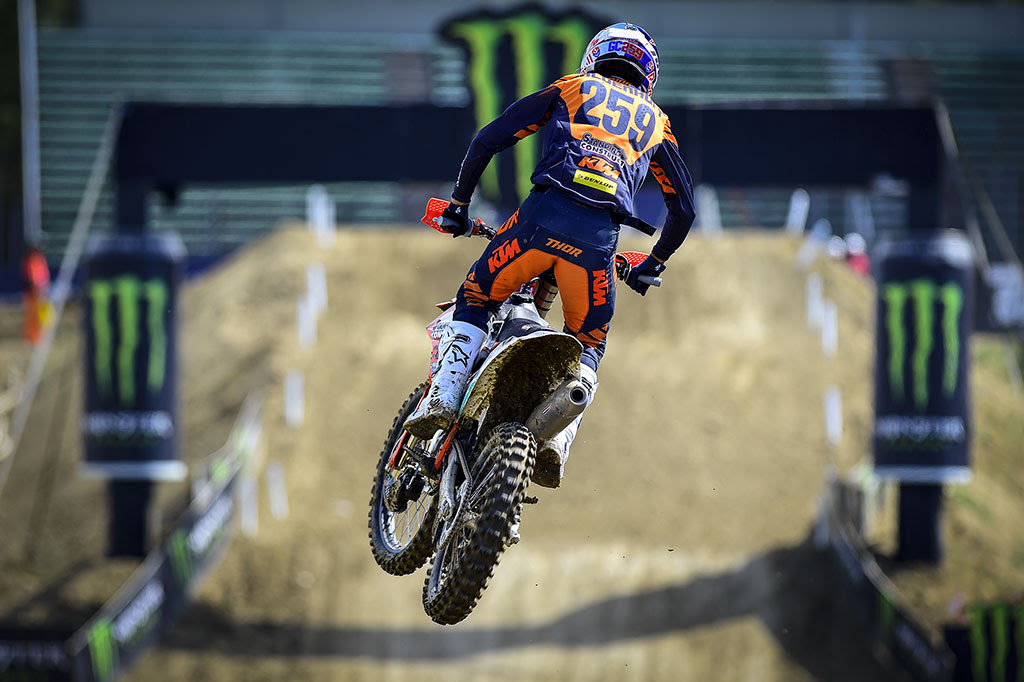 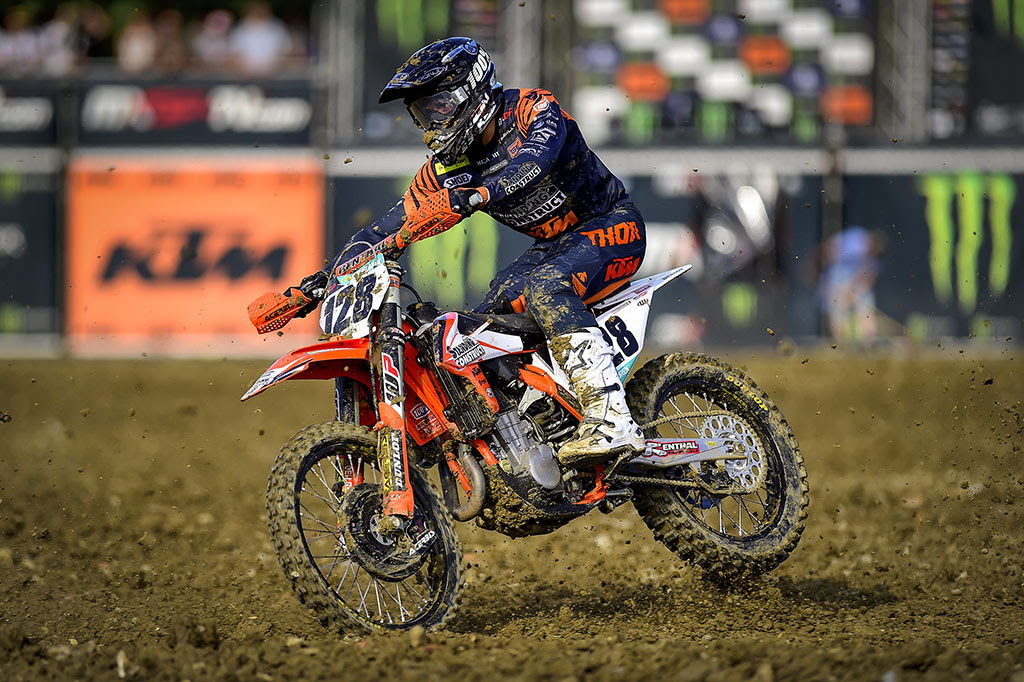 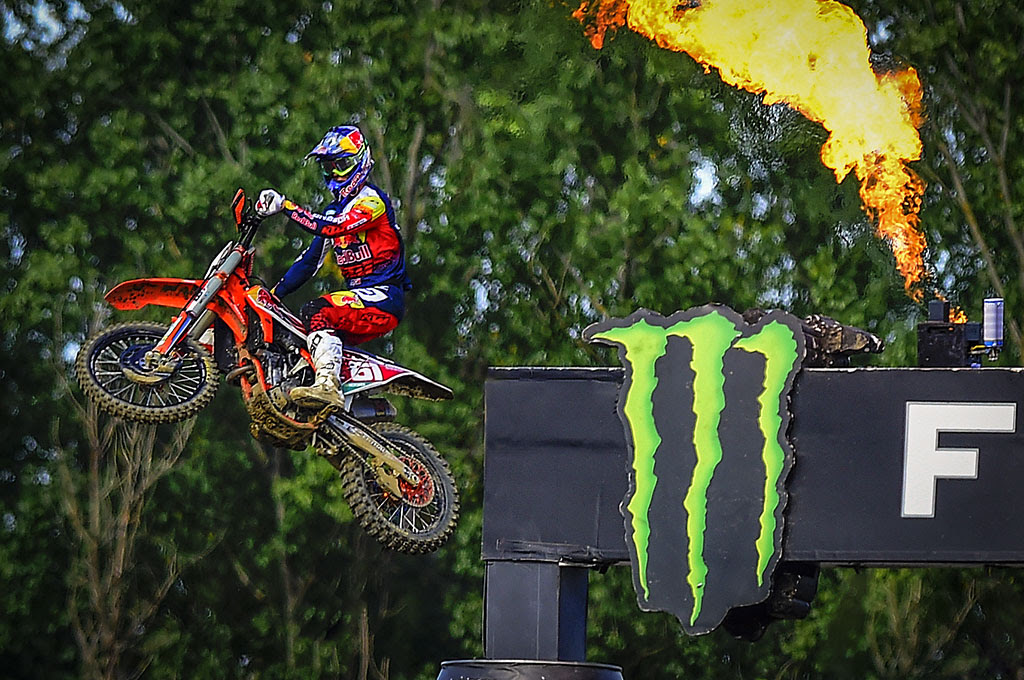 Olsen was on the move as he passed Geerts and Pichon to get into sixth and Pichon dropped back to eight position. Vialle made a mistake and crashed, then lost three positions as he struggled to remount. Geerts and Olsen were battling for fifth position as they swapped places while Vlaanderen, Evans and Sterry fought to get inside the top ten.

On Lap 5 Geerts went down and dropped to 10th, Vlaanderen moved into ninth place, and Maxime Renaux was up to seventh.

After six laps the lead was 13 seconds between Prado and Jacobi, and Sanayei moved into third place with Olsen fourth and Lapucci relegated to fifth position. Prado extended his lead to 19 seconds on lap nine and Olsen moved into third place, with Vlaanderen up to seventh, and the top ten was Prado, Jacobi, Olsen, Sanayei, Lapucci, Vlaanderen, Renaux, Geerts, Watson in 10th. Prado won his 11thQualifying race after leading the whole race from Jacobi, Olsen, Sanayei and Vialle in fifth place.

Jorge Prado: “Good qualifying race in Imola, I led all of the laps,I hit my hand on one of the banks twice but I feel good now with no pain. I had good speed and I really enjoyed the race” 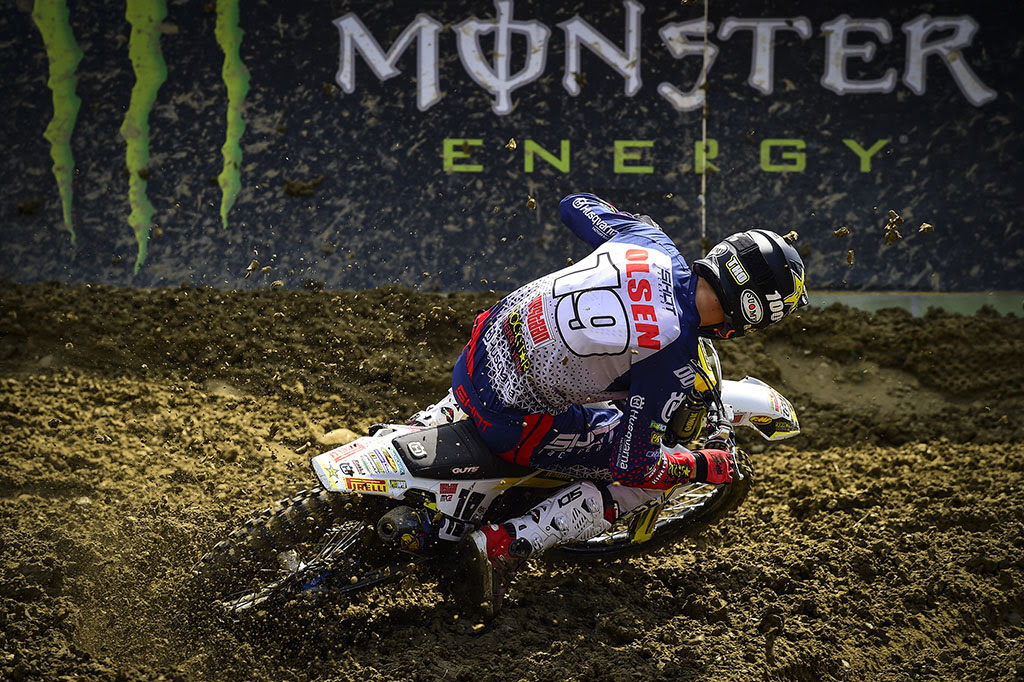