After a soggy day yesterday, the old-school track here in Talavera de la Reina was disked late last night and then again early this morning, which made for perfect conditions today at round nine of the FIM Motocross World Championship where Honda Gariboldi’s Tim Gajser and Red Bull KTM Factory Racing’s Jeffrey Herlings strengthened their grips on their respective red plates.

Honda Gariboldi’s Tim Gajser is the Jedi of MXGP at the moment. Sometimes you have to scratch your head at how he stays on, but take nothing away from the Slovenian, his speed and skill is overwhelming. The nineteen-year-old continues to push the law of physics and seems to be mastering the art of this sport we call motocross. After an uber impressive double moto victory today, his second double-doozie this year with the first being at the season opener in Qatar on his MXGP debut, he now has a 24-point lead in the championship over the defending champion Monster Energy Yamaha Factory Racing’s Romain Febvre.

Rockstar Energy Husqvarna Factory Racing’s Max Nagl has always been a picture of consistency. The German did look like he tried to turn it up a bit, but beating Gajser at the moment looks like it is only possible if the Slovenian dethrones himself.  “I was really trying hard, I tried everything but failed.” Nagl still smiled while speaking to Lisa Leyland after the final race, “he was just a little bit quicker, but anyway I am happy, I had a great day.”

Full credit must be given to Team HRC’s Gautier Paulin who stood on the box for the first time since August last year. The Frenchman who is currently the vice-world champion has been on the couch for most of the season after injuring his back and ribs in a training accident in April. He only made his return to racing two weeks ago at the MXGP of Trentino where he finished fourteenth. Incredibly, he was third today.

Monster Energy Kawasaki Racing Team’s Clement Desalle has been nursing injuries since the start of the season but has shown he can still run the pace with his fourth place finish this weekend, while Team HRC’s Evgeny Bobryshev rounded out the top five ahead of Romain Febvre who also put in a gritty performance.

On the topic of the defending champion, Febvre, there is no doubt that the crash he had yesterday has taken the wind out of his sails while his biggest rival, Gajser, has just gone from strength to strength. Febvre told us about his injury at the start of Race 2, “nothing is broken in my shoulder but there is some damage. It is very painful to ride, I can only hold the ‘bars but I cannot pull. So it’s a tough weekend.” He said, “All I can do is take as many points as I can. I will fight and I will give everything I can.”

Red Bull KTM Factory Racing’s Antonio Cairoli also had a rough weekend. The Italian only finished seventh after crashing in both races but on a positive note he set the Tag Heuer Fastest Lap, which means he was the fastest guy around Talavera this weekend. Meanwhile, keeping the Spanish fans on their toes, Marchetti Racing KTM’s Jose Butron equaled his best result this weekend with an eleventh. 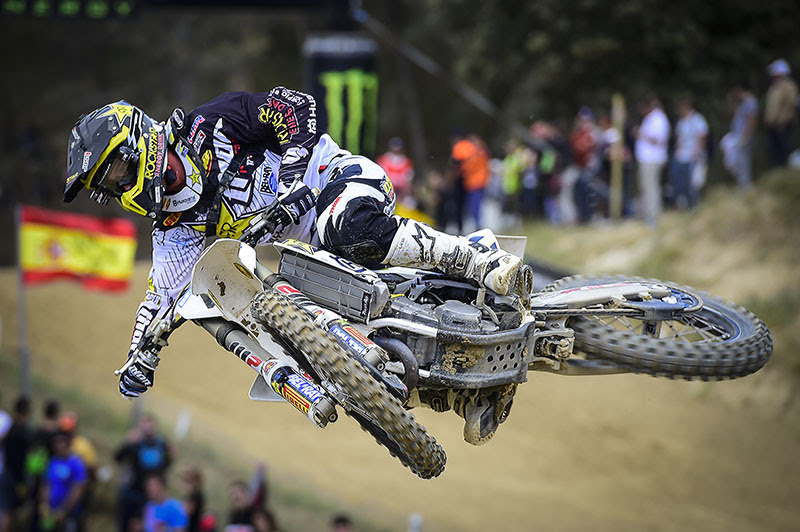 Red Bull KTM Factory Racing’s Jeffrey Herlings made a solid statement with his dominance out here on the clay of Talavera. Did you say clay? Yes! While Herlings is best known for his phenomenal skill in the sand, he can also clean up on a hard surface too, which is exactly what he did today with a double moto victory for his ninth consecutive grand prix overall.

After a bit of water and sun this weekend, Kemea Yamaha Official MX Team’s Benoit Paturel blossomed. The young Frenchman led the first couple of laps in race two before being passed by Herlings. While Herlings did what Herlings does best (checked out), Paturel rode’er home for second place, which was enough for second overall. This achievement is a career milestone for the lad riding the number ‘6’.

Red Bull KTM Factory Racing’s Pauls Jonass took a bunch of points back on Team Suzuki World MX2’s Jeremy Seewer today with a pair of thirds for third overall in comparison to Seewer’s eleventh in race one and fourth in race two for seventh. Both of these guys are similar in speed and are battling for second place in the championship, so every point counts. Jonass took 12 points on Seewer today, but still trails the Swiss man by 25.

Two weeks ago Monster Energy Kawasaki Racing Team’s Dylan Ferrandis took a massive pin and burst Jeffrey Herlings’ bubble of hope for a perfect season. He is the only rider to have beaten The Bullet this year and briefly ignited a flame in MX2. The Frenchman, who was the top Qualifier here in Spain, has proven he can challenge the dominance of Herlings but unfortunately had nothing for him today.

Wilvo Standing Construct Yamaha Official MX2 Team’s Aleksandr Tonkov did enough for fifth, which was his fourth top five finish of the season.

As for Honda Gariboldi’s Spaniard Jorge Zaragoza, a bike problem in race one and a spill in race two left him way down the score card, in twenty-third. MXGP was available across the board in high definition and is also globally available to view live and in HD on MXGP-TV.com. Click here for the complete list of countries and cooperating MXGP broadcasting networks.

NEXT ROUND
The next round of the FIM Motocross World Championship will take place in St. Jean d’Angely, France, on June, the 5th.