Intensity builds for the final races of the 2021 FIM Motocross World Championship as just three points separate the two MXGP title hopefuls as we enter the MXGP of Città di Mantova.

Monster Energy Kawasaki Racing Team’s Romain Febvre continues to hold the red plate after two strong races yesterday that saw him finish second on the podium to Red Bull KTM Factory Racing’s Jeffrey Herlings who secured his 98th career Grand Prix victory and edged closer to the series leader. Meanwhile a penalty in race one for Team HRC’s Tim Gajser was costly, as despite making up for it in the second race with a third-place finish, this has now left him 12 points behind Herlings in terms of the standings.

The next two races on Wednesday will be crucial as by the end of the final chequered flag we will crown our 2021 MXGP World Champion!

While the focus remains on the battle between Febvre and Herlings, there are two more champions to be confirmed as Fantic Factory Team Maddii’s Nicholas Lapucci will look to wrap-up the EMX250 title in front of his how supporters, while Valerio Lata from MRT Racing Team KTM will look to do the same in the EMX125 Presented by FMF Racing category.

The big focus on Wednesday will be the battle between Febvre and Herlings, as the pair will look for every possible advantage that will help them score maximum points. Both shared the wins yesterday, as Febvre won race one and Herlings was victorious in race two.

With the racing and the points so close, there is a possibility that we could see the pair tied on points by the end of the second race and in that case, it would go down to the race victories, which as it stands Herlings has the most of. The Dutchman has won a total of 13 races this season so far, while Febvre has won six. Just ahead of him is Gajser who has seven heat wins to his name.

Either way, the racing will be intense and as we have seen many times this season already; anything can happen and that’s why Gajser is not out of the run completely just yet. While the Slovenian may be 15 points off Febvre, his fight for the title is not over yet. Gajser has delivered consistent results and this consistency could pay off, in case Febvre and Herlings find themselves in any trouble.

While all eyes will be on the fight for the title, a rider who will no doubt be in the middle of this battle, is the 9-time World Champion, Antonio Cairoli of Red Bull KTM Factory Racing. The MXGP of Città di Mantova is set to be his final Grand Prix race as a full-time rider, which no doubt he will look to enjoy. Cairoli was on form yesterday as he rode two good races to get himself on the box and with his final two races approaching, he will no doubt be motivated to do the same and give his fans something to cheer about!

Then there’s Honda 114 Motorsports Ruben Fernandez who had a spectacular MXGP wildcard appearance as he got right in the mix with the front runners of the class. The Spaniard put up a challenge, especially to Herlings in race one, as he went on to finish in fourth and then seventh in race two, which gave him sixth overall. No doubt he will look to repeat his success of yesterday and deliver some more positive results for the final race of the season.

Monster Energy Kawasaki Racing Team’s Mathys Boisrame was also another rookie who was keen on getting in the mix at the front. He finished race one in ninth, while he got unlucky in race two, where he was forced to DNF. With the bad luck behind him, it would be nice to see him battling inside the top 10 once again as he hopes to secure a team for 2022.

Rockstar Energy Husqvarna Factory Racing’s Arminas Jasikonis made his return after missing the triple-header in Pietramurata. The Lithuanian struggled, as he finished race one in 18th, while in race two he ran into some trouble and did not finish the race. The Husqvarna rider is still making his recovery after a serious injury last season, but will no doubt be motivated to deliver some positive results for the final race. His teammate Thomas Kjer Olsen will look to do the same after another top 10 finish yesterday. The Dane finished seventh and tenth for eighth overall, which is his sixth top 10 finish of the season.

Now it’s time to look forward to the races on Wednesday as the final races are bound to deliver a lot of excitement as we witness the closest battled for the title in the premier class since 1986. 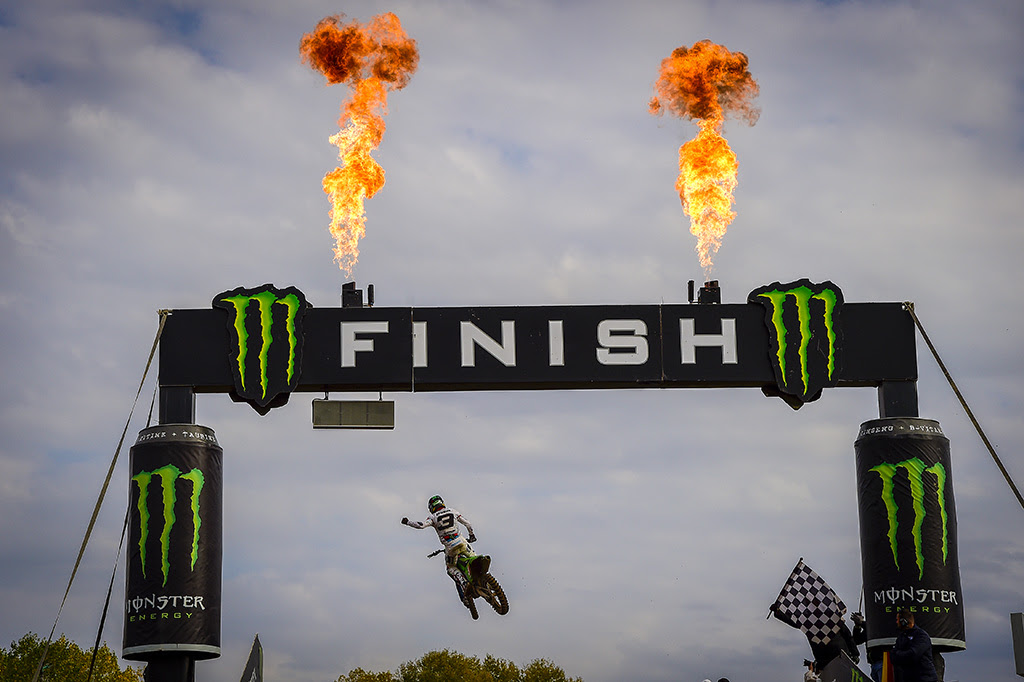 In MX2, Monster Energy Yamaha Factory Racing’s Maxime Renaux will enter the final race with the pressure off his shoulders after wrapping up his maiden MX2 World Championship title two rounds ago in Pietramurata. Now the Frenchman will be able to enjoy the final races and revel in his success.

And while Renaux will be more relaxed than ever, his teammate Jago Geerts of Monster Energy Yamaha Factory Racing and Red Bull KTM Factory Racing’s Tom Vialle will not have that luxury. The pair are divided by just seven points in the battle for the silver medal and Geerts will no doubt be feeling confident after his overall victory yesterday. Geerts was looking strong as he finished the day with a 2-1 result to have the advantage over his teammate Renaux, while Vialle looked like he was struggling to find his rhythm on the hard sand track. Nonetheless, the Frenchman was third on the box. Confirming in the post-race press conference, Vialle said he will make some changes to his bike and come back for the final race ready to be out in front once again.

Red Bull KTM Factory Racing’s Mattia Guadagnini is set for his final MX2 race as a rookie, as he will look to round out his first season in the World Championship on a high. This season so far, the Italian has held the red plate, secured three race wins and two Grand Prix victories, along with a total of six visits to the podium. Those are pretty impressive statistics for a rookie, and we could even see him add to these on Wednesday.

His Austrian teammate, Rene Hofer will look to bounce back from an unlucky MXGP of Lombardia. Hofer finished sixth and ninth for seventh overall, despite two crashes. But those are not the results he is capable of, as we have seen him win races in the final rounds, as well as taking his first pole position yesterday. It is clear that the KTM rider is fast here, so it will be interesting to see what results he can deliver for the end of the season.

The fight for the podium will be intense as Rockstar Energy Husqvarna Factory Racing’s Jed Beaton and Kay de Wolf are on the verge of their fourth podium this season. Beaton missed the podium yesterday by just two points as he battled well inside the top five in both races, finishing fifth and third. For Beaton, Wednesday will be his final race in MX2, and he will be more motivated than ever to end his MX2 career on the podium. His younger teammate de Wolf will want to solidify his rookie season too, so we can also expect him in the mix once again.

It will be interesting to see what the final races of the 2021 season will deliver. 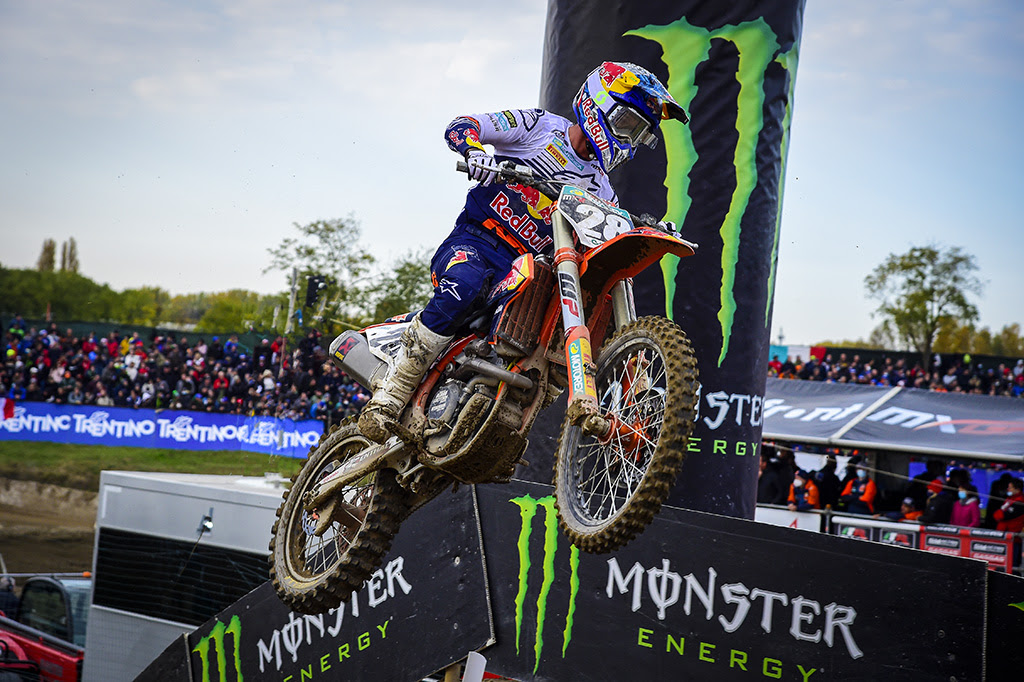