The 11th round of the FIM Motocross World Championship returns to Teutschenthal, Germany, for this year’s Liqui Moly MXGP of Germany, the 26th edition of the German Grand Prix.

While this year the MXGP championship is far more open, the MX2 title bout however is closer than ever with just 11 points separating Red Bull KTM Factory Racing’s Tom Vialle and Monster Energy Yamaha Factory Racing’s Jago Geerts and this weekend’s races will be crucial.

The hardpack track of Teutschenthal has been part of the FIM Motocross World Championship since the 70’s and first hosted a 250cc Grand Prix in 1971 which was then won by the six-time world champion Joël Robert.

Alongside the main MXGP and MX2 action, this weekend’s races will also see the rounds of EMX125 Presented by FMF Racing, EMX250 as well as the Junior e-Motocross series! As it stands, Fantic Factory Team Maddii’s Cas Valk heads the 125cc championship while in the 250cc class is led by Hutten Metaal Yamaha Racing’s Rick Elzinga who has just a one-point margin over Fantic Factory Team Maddii’s Cornelius Toendel.

One of the biggest news of this weekend is that Romain Febvre of Kawasaki Racing Team MXGP will make his much-awaited return behind the gate after six months off the bike. Febvre’s injury came with some complications, but the Frenchman is now ready to make his comeback to MXGP!

The German Grand Prix is going to be an important one for Team HRC’s Tim Gajser who has a chance to bounce back after some tough races since picking up an illness before Sardinia. Gajser has failed to mount the podium in the last three GPs, though if last year’s race in Teutschenthal is anything to go by, the Slovenian could surprise us with another overall victory at the German venue.

Gajser leads the championship by 73-points over Monster Energy Yamaha Factory Racing’s Maxime Renaux who had a hard home GP and will no doubt be looking to make amends in Germany, a GP that he won last season, after Red Bull KTM Factory Racing’s Tom Vialle was issued a penalty.

Monster Energy Yamaha Factory Racing’s Glenn Coldenhoff and Jeremy Seewer are real threats for the podium this weekend, after Coldenhoff secured his third overall top three finish on the bounce in Ernée with a race win in race two, while his teammate Seewer was the big winner with a 1-2 result in the races. For both riders, it seems like the last couple of GPs have been a turning point, in terms of overall set-up and confidence, so it will be interesting to see if they can carry on with this winning momentum for the second half of the season.

Red Bull GasGas Factory Racing’s Jorge Prado has been building towards the top step of the box since making his return from a shoulder injury in Sardinia. Last weekend, Prado was the leading man in both races before being caught by the Yamaha guys, which just proved that the Spaniard is not 100% physically yet, but can still be competitive at the sharp end nonetheless.

Home hero Henry Jacobi of JM Honda Racing will be looking to put on his best performance in front of the German fans, and his qualifying race victory from the French GP will no doubt be a confidence boost and an extra push of motivation in order to challenge for his best result of the season. This weekend, Red Bull KTM Factory Racing’s Tom Vialle is once again the heavy favourite after dominating the last three GP’s in a row. He will be full of confidence after the surprise victory at his home GP and with 11 points ahead of Jago Geerts from Monster Energy Yamaha Factory Racing, he will no doubt be fired up to take as many points from the Belgian as possible.

Last weekend in France, Geerts again had moments of struggle. The crash in qualifying left him feeling second handed but nonetheless he managed two very consistent second place finishes after intense battles with Vialle and his teammate Thibault Benistant of Monster Energy Yamaha Factory Racing. Geerts needs a victory in order to take the extra points from Vialle if he wants to keep the title within touching distance.

Benistant is another rider who we could see battling at the sharp end, after winning a race in front of his home fans and securing his second podium of the season. He is also a strong hard-pack rider which he proved this season already, but good starts will be a key to getting ahead of the likes of Vialle and Geerts.

Home rider Simon Längenfelder of Red Bull GasGas Factory Racing is another rider who will be expected to challenge at the forefront this weekend. The German won the qualifying race in France last time around and had some strong starts that put him at the front with Vialle and Geerts. If he can do the same again this weekend, it could be a dream race for the German who will be hoping to get on the box in front of his home fans. 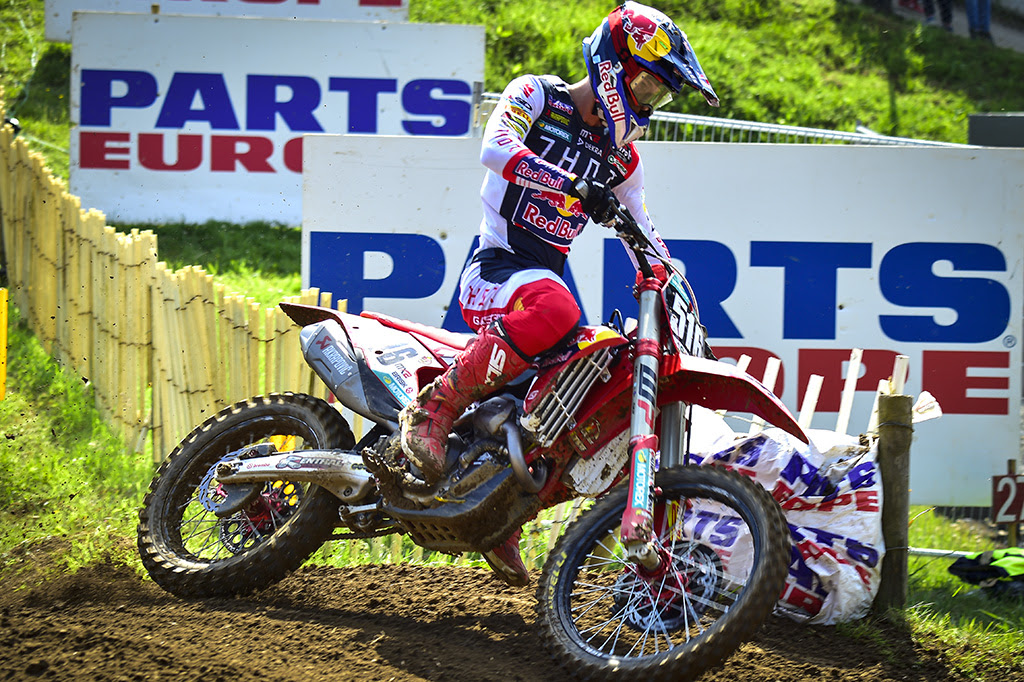 All the photos from the Liqui Moly MXGP of Germany will be available HERE.