The 2021 season of the FIM Motocross World Championship is nearing the end, as we enter the final two rounds in Mantova for the MXGP of Lombardia and MXGP of Città di Mantova.

Meanwhile in MXGP, things could not get any more tense as the red plate has a new owner and just three points separate Monster Energy Kawasaki Racing Team’s Romain Febvre, Team HRC’s Tim Gajser and Red Bull KTM Factory Racing’s Jeffrey Herlings. There are still 100 points up for grabs and it will be interesting to see how things will play out.

Alongside the fierce MX2 and MXGP action we will also see the final round of the EMX2t Presented by FMF Racing as Fantic Factory Maddii Team’s Maximilian Spies will enter the final round looking to wrap up his first EMX title. Last year’s Champion, Brad Anderson of Verde Substance KTM will look to get back in the driving seat and secure his fourth title as he sits just 16 points behind the leader. In addition, we will also see round nine of the EMX250 series, as Fantic Factory Maddii Team’s Nicholas Lapucci will look to put together two solid and mistake-free races to stay ahead of his championship rival, Kevin Horgmo of SM Action Racing Team YUASA Battery.

The MXGP of Lombardia is bound to deliver some incredible racing as Febvre, Gajser and Herlings will be focused on scoring maximum points, in order to have the best chance of clinching the title this season. This championship fight that we are bearing witness to, is by far one of the exciting ones in the history of the sport and something we have not seen for a while.

And while this championship showdown is going to take centre stage in Mantova, another important moment will be the final races of Red Bull KTM Factory Racing’s Antonio Cairoli. The second half of the season hasn’t been easy for the 9-time world champion who lost his chance to stay in the fight for what would have been his 10th title. But with that pressure off his shoulders, we have seen Cairoli back in the game during the last two GP’s.

During the MXGP of Pietramurata, Cairoli secured his second overall of the season and then at the following MXGP of Garda, was once again competitive inside the top five. It will be interesting to see what the Italian can bring for his final races, especially with the huge support he is set to have around the track!

Monster Energy Yamaha Factory Racing’s Jeremy Seewer will enter the MXGP of Lombardia off the back of his second career MXGP overall victory. No doubt this will give him a confidence boost, especially as the MXGP of Lombardia last season was when he got his first ever GP win. Seewer has been on form lately after his struggles in the first half of the season. Now back to fitness, the Swiss is just four points behind Red Bull KTM Factory Racing’s Jorge Prado in the MXGP championship standings, so we could see the Yamaha rider go for fourth, to end his season on a positive note.

Of course, Prado will not look to give it up easily as he continues his struggle with a back injury that he picked up a few rounds ago. Despite the damage, the Spaniard has been able to run well inside the top 10 and even lead some laps.

Monster Energy Yamaha Factory Racing’s Glenn Coldenhoff and Ben Watson will be looking to end their season with a strong result and Mantova could be the perfect place to do that. Coldenhoff secured his second podium of the season at the MXGP of Pietramurata and has previously been on the box in Mantova last year. While Watson has fond memories at the circuit too. He climbed the podium last season in MX2, as well as becoming this year’s overall MXGP winner at the Monster Energy FIM Motocross of Nations, as he helped Team GB onto the podium once again!

Then there’s also Rockstar Energy Husqvarna Factory Racing’s Thomas Kjer Olsen who won the MXGP of Lombardia last season in MX2 and won a race at the Monster Energy FIM Motocross of Nations this season in Mantova too. So, this is a track he certainly feels strong on, and it will be nice to see if he could end his MXGP rookie season with a podium. His teammate, Arminas Jasikonis will also make his comeback at the final two races after missing the triple-header in Pietramurata. The reason why Jasikonis took the time off is unknown, but it will be good to see him back behind the gate.

Making a move to MXGP this weekend is Honda 114 Motorsports’ Ruben Fernandez who after a string of podiums in Pietramurata (three consecutive third place finishes) will take on the premiere class in order to gain experience and to see how he matches up with the 450cc guys. With the MX2 title decided, Renaux will enter the MXGP of Lombardia with a lot less pressure on his shoulders. However, this doesn’t mean that he won’t be pushing for the win. The Frenchman is keen on continuing with the strong momentum of the previous round, where he stood on the top step of the podium as he secured the MX2 crown, so there is no doubt that we will see him pushing at the front of the field.

While Vialle was unsuccessful in defending his title this time around, due to injury early on in the season, he has been very competitive since his return. In fact, he has led more laps than any other rider in the category, with the number currently at 255 while Renaux has led 103 and is second in terms of that statistic. Vialle has had a couple of unlucky races which has resulted in DNF’s but he is now second in the championship and will push for a strong end to his season as he begins to focus on 2022.

Geerts still has a chance to get back that silver medal position, but he will need to bounce back after a devastating MXGP of Garda where he could not carry on with race two and thus was unable to take the title chance into the next round. With that no behind him, it will be fascinating to see how he comes back from that.

Meanwhile Rockstar Energy Husqvarna Factory Racing’s Jed Beaton could be one of the favourites for the podium this weekend. The Australian was second overall during the MXGP of Lombardia last season and he secured that spot with a race win, so this should give him a confidence boost. He is yet to lead any races, as his younger teammate Kay de Wolf has led 15 laps this season, but this could be the weekend we see him at the front.

Then there’s also Rene Hofer and Mattia Guadagnini of Red Bull KTM Factory Racing. At the last two rounds, we saw Hofer secure his first race wins in MX2 as well as win his first Grand Prix, while Guadagnini has struggled. It will be interesting to see if Hofer can carry this success into the hard sand track and whether Guadagnini can get back on the box after some successful races in Mantova last season in EMX250. The motivation will be there for sure as the Italian will want to put on his best performance for his home fans as he looks to end his MX2 rookie season in the best way. 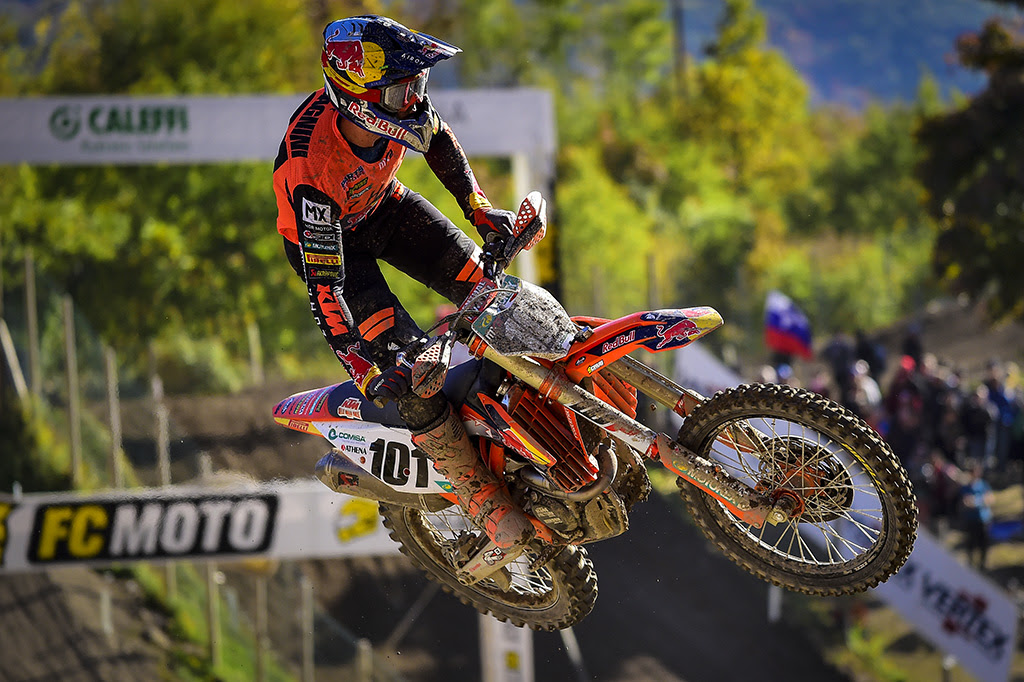