The first day of racing has concluded in Maggiora Park, the host of the MXGP of Italy and the seventh round of the FIM Motocross World Championship.

After some intense battles, Monster Energy Yamaha Factory Racing’s Maxime Renaux and Red Bull KTM Factory Racing’s Tom Vialle will go to the line first tomorrow as they claimed victories in the MXGP and MX2 qualifying heats, with Renaux claiming his second qualifying win in MXGP and Vialle his first of 2022.

As riders fought for positions on the opening lap, Vlaanderen dropped down to sixth, while Gajser began to apply the pressure onto Renaux, with Seewer keeping a close eye on the pair ahead.

Gajser then set the fastest lap of the race in the early stages as he was searching for every opportunity to get around Renaux while for a moment it looked like Seewer was losing touch on the pair.

On lap five Standing Construct Husqvarna Factory Racing’s Brian Bogers crashed out of ninth ahead of Alberto Forato of SM Action Racing Team YUASA Battery, as wildcard rider Christophe Charlier of Riley Racing moved up to tenth with Kawasaki Racing Team MXGP’s Ben Watson just behind him. Charlier held on to the position until the end of the heat, as Watson dropped back to 13th.

In the closing stages, Vlaanderen began to close the gap back down to Coldenhoff as he searched for a way to take back the position he lost earlier, all while Gajser started to look impatient as he struggled to find a way past the Frenchman ahead of him.

Renaux did a great job to not crack under pressure as he secured his second qualifying win of the season in MXGP, ahead of Gajser, Seewer, Fernandez and Jonass.

Maxime Renaux: “It was a great qualifying; it was good to get another holeshot in qualifying, but I want to get those holeshots in the races. It was a nice race, I had a lot of pressure from Tim throughout the whole race and I felt that he was pushing. It’s a good warm-up for tomorrow, I felt good on the track and let’s try to make two good starts in the races tomorrow, that would be nice”. 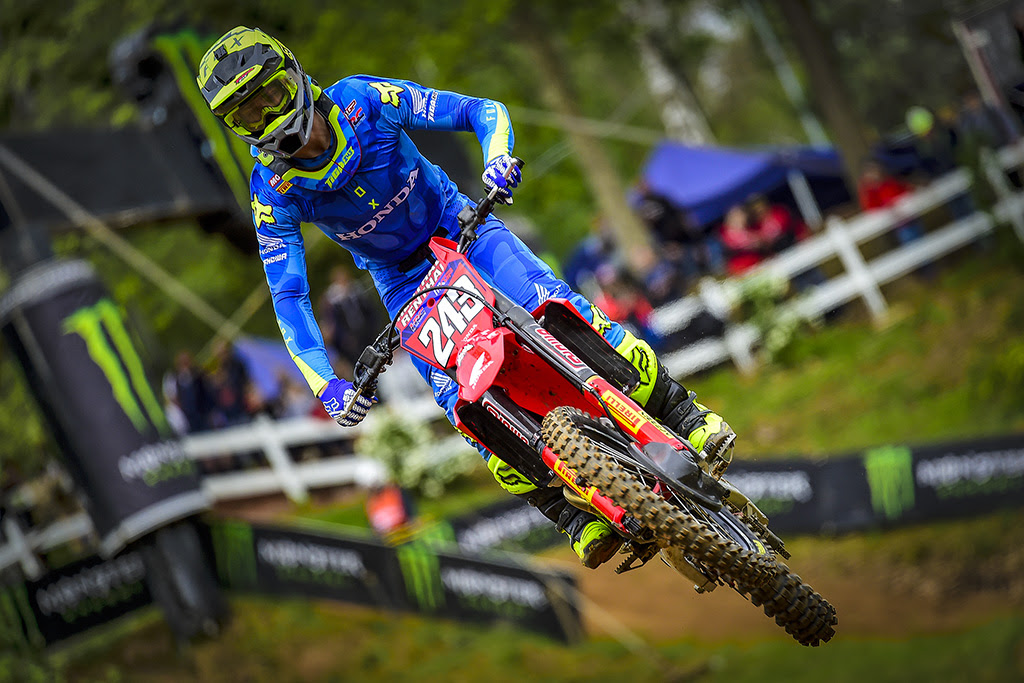 As the gate dropped for the MX2 qualifying race, it was Team VRT KTM Veritise’s Tom Guyon who grabbed the holeshot, though Red Bull KTM Factory Racing’s Tom Vialle was quick to take over the lead as Monster Energy Yamaha Factory Racing’s Jago Geerts slipped into second, with F&H Kawasaki Racing’s Kevin Horgmo following in tow.

Geerts then responded to Vialle by setting his own flying lap as he looked to close in on the leader, while further down the field Nestaan Husqvarna Factory Racing’s Kay de Wolf crashed out of seventh but managed to get going fairly quickly to remain inside the top 10 but then dropped down to 11th by the chequered flag.

Guyon crashed out of fourth and made another mistake as he dropped down to 12th, as Vialle and Geerts continued to trade in who set the fastest lap of the race as they continued to get faster.

Jan Pancar of TEM JP253 was having a strong ride, after posting the fifth fastest time in time practice. The Slovenian eventually finished in 9th.

Throughout the race Vialle and Geerts stayed close, until Geerts crashed with just two laps to go and Vialle was able to take his first qualifying win of the season. Despite the mistake, Geerts managed to hold on to second place as Horgmo crossed the line in third ahead of Monster Energy Yamaha Factory Racing’s Thibault Benistant and Big Van World MTX Kawasaki’s Mikkel Haarup.

Tom Vialle: “It was a good race. I had a great start, and every lap Jago was pushing so it was not easy to make a gap, but I just tried to ride as good as possible. It’s the first qualification race win for me so it’s really nice. Normally on Saturday I don’t push so hard but now we have a good gate pick for tomorrow which is nice, so now we will try to do the same tomorrow”. All the photos from the MXGP of Italy will be available HERE.