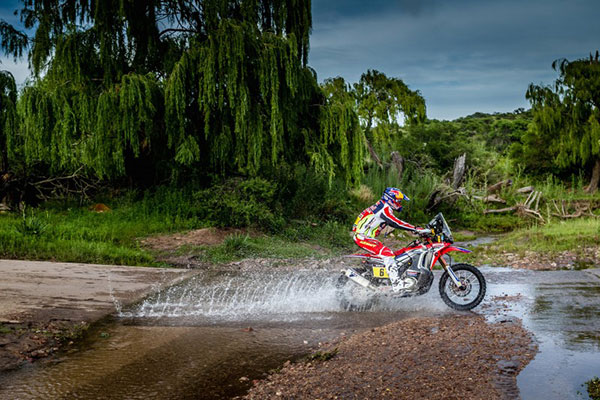 The huge storm that blasted the riders during the first special stage yesterday – forcing the event to be cancelled – continued its course today and wreaked havoc with the programmed route, flooding large stretches of the track. Race organizers subsequently patched together a new, revised special stage from Villa Carlos Paz to Termas de Río Hondo, with the planned 450 kilometres being reduced to a total of 354, against the clock, with the finish at CP4.

In spite of this, riders were still faced with a muddy quagmire, which compromised both stability and visibility, especially for the faster riders such as Paulo Goncalves who were forced to start from rear positions due to the starting order decided at the prologue stage two days earlier.

It was indeed the Portuguese rider Gonçalves who proved to be the fastest of the Team HRC squad today in what was the first real day of racing after yesterday’s cancellation. Paulo kept up a cracking rhythm, clawing back time and places during the special stage to chalk up the sixth fastest time of the day just 2’38 behind the stage winner Toby Price.

Joan Barreda opened the track for a great part of the special stage until he found himself on a mud-filled track where he lost some time getting momentarily stuck. The riders behind followed his tracks and his rival Ruben Faria caught up with the Spaniard who navigated alongside for some four kilometres.

Frenchman Michael Metge was up among the front-runners the whole day and was overtaken by some adversaries who started from behind and took advantage of the path marked out by the proceeding pack. Metge, 17th, conceded little to the front-runners.

Ricky Brabec made his first real Dakar Rally stage debut with a well-balanced performance in some fairly unfavourable conditions. Likewise, Paolo Ceci overcame a tricky stage to finish in the first twenty-five.

Honda South America Rally Team, once again being supported by Team HRC, continue to remain very active in the race with their riders well-situated. Kevin Benavides was once again the fastest of the HSA Rally Team, finishing in eighth behind Barreda. Javier Pizzolito and Adrien Metge were among the first thirty on the day and only have cause to complain about a fall by Brazilian Jean Azevedo at kilometre 30. Fortunately he was able to get back on the bike and back into the race, if at a somewhat slower pace than before.

Hunters, take aim
The format is tighter for the day’s race against the clock… as are the mountain tracks featuring in the special section. Experts in sliding and on the road will be able to showcase their skills here, as long as they stay constantly focused. Those hunting down the leaders will be on high alert during this route, which has been designed for opportunists. But the programme could also be transformed by any rain: even the strongest competitors do not necessarily perform well on heavy ground.

You can see details of the third stage (route and profile) here.

Joan Barreda 6
STAGE: 7th OVERALL: 6th
It was a complicated day; we set off opening the track after yesterday’s cancellation and over the first kilometres all was going fine, but after I found myself in a mud-filled track where I got stuck several times. I had to push really hard and I lost a bit of time but later I was able to pick up the pace. In the end I conceded a bit of time in this long stage.

Paulo Goncalves 2
STAGE: 6th OVERALL: 7th
This was a serious 350 kilometre stage. I came out really strong and there was a bit of dust in the beginning, but after I got caught up in the mud. Luckily there was Ricky Brabec who helped me out of it. I didn’t lose too much time and the final position is a good one. The important thing is to be up there near the head of the field, not lose the fight and battle on to the end.

Michael Metge 19
STAGE: 17th OVERALL: 16th
Today was a really nice special, the first real one of the Dakar, quite long with a good grip. There were some really muddy parts but I was able to get past quite well. After that I was able to continue without real problems and I enjoyed myself a lot.

Ricky Brabec 48
STAGE: 21st OVERALL: 21st
Today was the first real day, you could say, as we raced through the dirt. It was a good, really fast day. I got hung up for maybe four or five minutes and then Paulo got by me and he got stuck in the mud also. I helped Paulo get out of the mud. Other than that there were no issues. It was a really hot day.

Paolo Ceci 32
STAGE: 22nd OVERALL: 22nd
I’m very pleased. It has been a great stage without navigational difficulties. I kept up a good pace and am satisfied. We have to keep on like this.

Kevin Benavides 47
STAGE: 8th OVERALL: 8th
It was a really nice stage. I felt great with the bike and the navigation. I tried to hold my nerve and found a good pace in the race. I’m happy with the way the first stage of my first Dakar went.

Wolfgang Fischer
Team HRC Team Manager
So, finally today the Dakar Rally really got started after the cancellation of stage one because of the bad weather situation. We are quite happy to see it come to an end because there was a lot to lose and not a lot to win. Fortunately, everybody got through really well even if it was especially difficult for Joan, being the first rider out there and having to find a the best way through the mud. He lost some time being the first one. There was some nice teamwork between Paulo and his team-mate Ricky Brebec and we are lucky to have everyone together in the bivouac and we will be preparing to attack tomorrow.