The 2019 Motocross of European Nations has concluded at the Gdansk circuit here in Poland. Team Italy rode their way to victory as they defended their title once again, and in the women’s category, Team Netherlands finally took that all important victory!

The weather in Poland was a mixture of rain and sunshine, as riders battled it out in all weather and track conditions for pride and glory for their country. A total of six races took place this weekend starting off with the Women’s Motocross of European Nations and finishing off with the EMX125/250 race, with the EMX85 in between.

Each group rode a total of two races, as they fought for the highest positions, in order to take the least amount of point, with the worst result not being counted.

In the opening combined 125cc/250cc race, it was Team France’s Thibault Benistant who took the holeshot, followed by Team Italy’s Morgan Lesiardo and his team-mate Andrea Roncoli.  Meanwhile, yesterday’s qualifying heat winner, Mikkel Haarup was just outside the top five.

By lap two, Benistant continued to lead as Haarup was pushing for the top three, making a pass on Team Italy’s Andrea Roncoli, which saw the Danish rider move into fifth and then just half a lap later into fourth as he passed Team Estonia’s Jorgen Matthias Talviku.

On lap five, Morgan Lesiardo was chasing down Thibault Benistant and by the following lap there was a change of leader as Lesiardo moved into first position. Meanwhile, Haarup was already in third, making a charge for second and just 1.804 seconds off the leader, so the top three riders were in a serious battle for the win.

Team Norway’s Kevin Horgmo made a pass on Roncoli, which saw him move up into sixth place. Having a good ride for Team Russia though, was Daniil Balandin who was down in 11th.

With one lap to go, Haarup was just 1.034 seconds off Benistant, and with just one corner to go before the finish, a backmarker got in the way for Benistant which allowed Haarup to charge and take the win with just 0.373 seconds over the French rider.

In the second race things were a little different for Mikkel Haarup as he got a great jump out of the gate and was the leading rider into the first corner. Just behind him was Morgan Lesiardo and Thibault Benistant, with Jorgen Matthias Talviku in fourth.

By the second lap, Haarup was already 7.301 seconds ahead of Benistant in second, with Talviku making a move into third. Having another good ride in 5th was the Russian rider, Daniil Balandin.

Just two laps later, Benistant, Lesiardo and Talviku were in a serious battle for 3rdwhich allowed Haarup to get 12 seconds ahead of the field. Meanwhile, we saw Lion Florian from Team Germany lose three positions, dropping out of 8th.

As Talviku was pushing to get back past Balandin for fourth,Team Norway’s Kevin Horgmo and Xavier Cazal of Team France were in a serious battle for 11th place.

In the end, Mikkel Haarup went on to take another win, but this time with a 20.6 second lead, followed by Morgan Lesiardo who managed to get past Thibault Benistantwho finished 3rd.

Mikkel Haarup: “For myself of course I’m feeling really good but it’s a shame for the team as we were showing really good speed yesterday. The weather was really difficult, especially for the small kids but eventually we had some really good results, it would’ve been great to have Team Denmark on the podium but we will try again next year”. 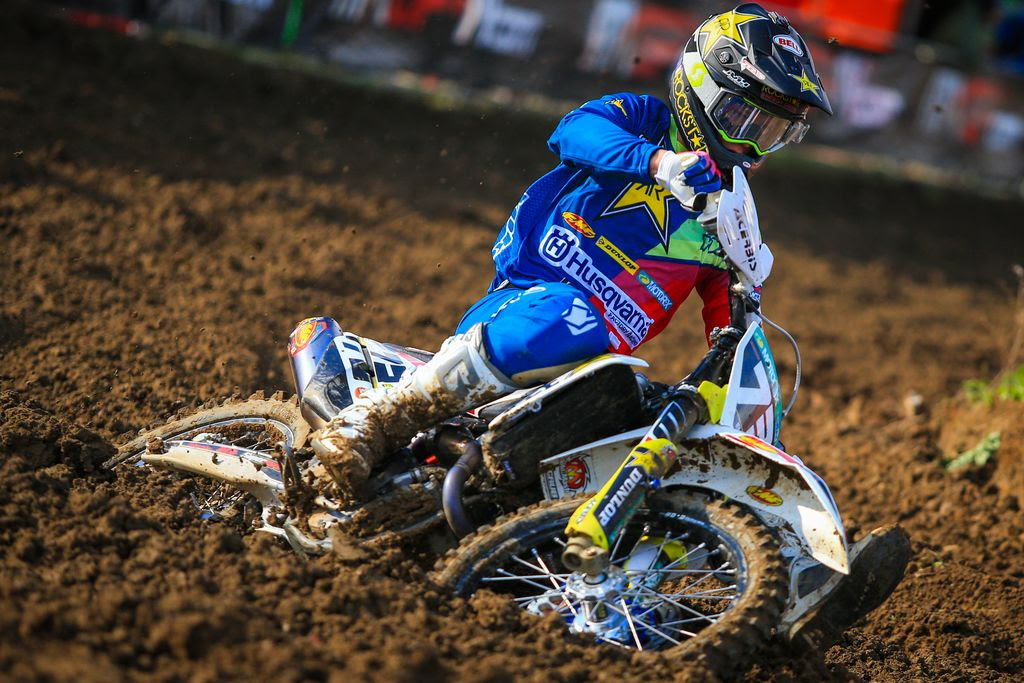 In the first EMX85 race it was Team Germany’s Maximilian Werner with a flying start followed by Team Denmark’s Mads Fredsoe and Team Lithuania’s Ugnius Liulys.

Mads Fredsoe made a quick move into the lead, with his team-mate Lucas Bruhn not far behind in fourth. This was a great start for Team Denmark as they were hoping to make a podium appearance this year.

In lap five, yesterday’s qualifying heat winner, Karlis Alberts Reisulis was up by an impressive seven positions as he found his way into 5th place, with Team Italy’s Valerio Lata also moving up 4 places into 19th, following a poor start.

As Latvia’s Karlis Reisulis made a strong move into second place, bad luck struck the Latvian rider as a crash saw him drop back down to P9, with a lot of work to do. At this point Fredsoe was already 24.2 seconds ahead of Lazslo Mark Tecsi of Hungary who was second at the time.

In the end it was, Mads Fredsoe who took the win for Team Denmark by an impressive 43 seconds, followed by Team Spain’s Victor Puig Cumi and with Karlis Reisulis in third.

In race two, it was Laban Alm of Sweden with a good start, followed by Valerio Lata, Jaka Peklaj of Team Slovenia and Elisey Oreshkin of Russia in fourth. Though Lata made a quick move into first and was the new race leader, with Alm dropping down to 8th. Bad luck struck the first race winner, Mads Fredsoe as he was down in 30thon lap 3.

With just a few laps to go, Hindersson made the move on Cawet to move up into second place. Also moving up was Team Czech Republic’s Julius Mikula who was now in fourth.

In the end it was Valerio Lata who took the win for Team Italy, with Kasmir Hindersson in second and Edgar Canet, Julius Mikula and Laszlo Tecsi rounding out the top 5.

The overall winner of the day was Valerio Lata, with an 8th in race one and a win in race two. 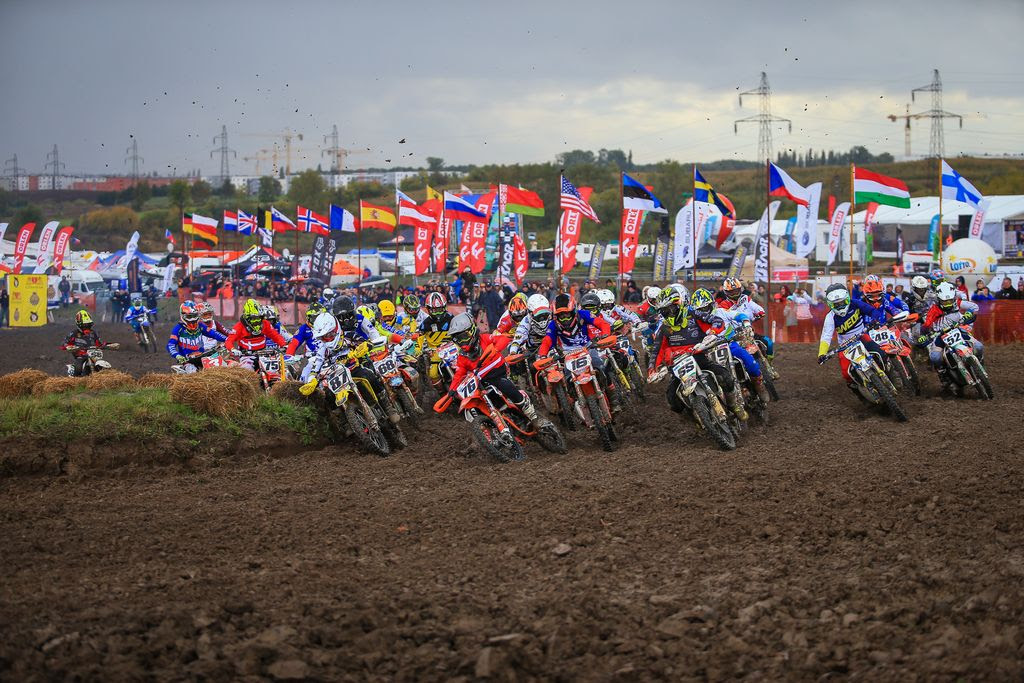 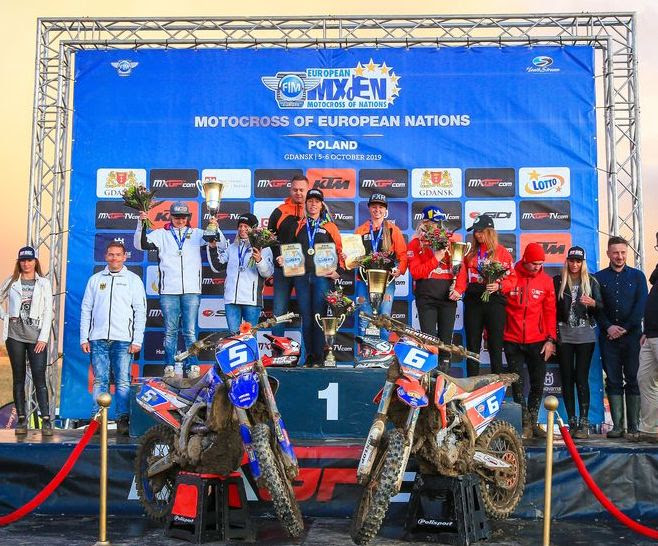 In the WMX opening race of the day, it was Nancy van de Ven of Team Netherlands taking the holeshot, closely followed by Team Germany’s Larissa Papenmeier, who briefly made a move into the lead, before van de Ven quickly responded with a pass back on the German rider.

Team Belgium’s Amandine Verstappen made a move into second, pushing Papenmeier further down the field. Meanwhile Team USA’s Jamie Astudillo and Kylie Fasnacht were down in 10thand 13th.

By lap two, Verstappen was chasing van de Ven, as Team Denmark’s Line Dam and Sara Andersen were 4th and 5th and pushing on Papenmeier. Fellow German, Anne Borchers was making her way through the field in 6thposition, looking to stay with the Danish pair ahead.

Several laps later, Andersen was forced into the pits, quickly re-joining the race but loosing 8 positions in the meantime, while her team-mate was holding strong in 5th.

In the later stages of the race, van de Ven was still leading the way, followed by Verstappen 3.139 second behind and Papenmeier and Borchers together in 3rdand 4th. At the same time, Kylie Fasnacht was looking to make up for the lost position as she was chasing down Team Sweden’s Sandra Karlsson who was 8th.

With two laps to go, defending champions Francesca Nocera and Giorgia Montin were in 11th and 17th place, while van de Ven continued to lead her way to the first race win.

In the end it was van de Ven with the win, followed by Verstappen, Papenmeier and Borchers in 3rd and 4th, with the German pair going into race two as the leaders.

In the second race it was Larissa Papenmeier setting a good start, followed by Nancy van de Ven, Anne Borchers and Line Dam.

Once again though, it was van de Ven who got into an early lead, followed by Papenmeier, Borchers and Sara Andersen and Line Dam for Team Denmark. Andersen made the move on Borchers into 3rd place. Meanwhile Shana van der Vlist was in 6th position for Team Netherlands.

By lap 3, van der Vlist made the move on, Line Dam, pushing the Danish rider down to 6th, while her fellow Dane, was chasing van de Ven for the lead. At the same time, Sweden’s Sandra Karlsson found herself struggling with the track conditions and was dropping down the field. Later it became evident that her bike was stuck in a rut on track, offering a huge blow for team Sweden.

By lap 8, van de Ven had managed to pull away from Andersen, with Borchers moving past Papenmeier. van der Vlist was now up in 5th with Line Dam just behind her.

In the end it was Nancy van de Ven with the race win as well as the overall victory of the weekend. This was topped off with Team Netherlands also taking 1st overall in the Nation’s classifications. 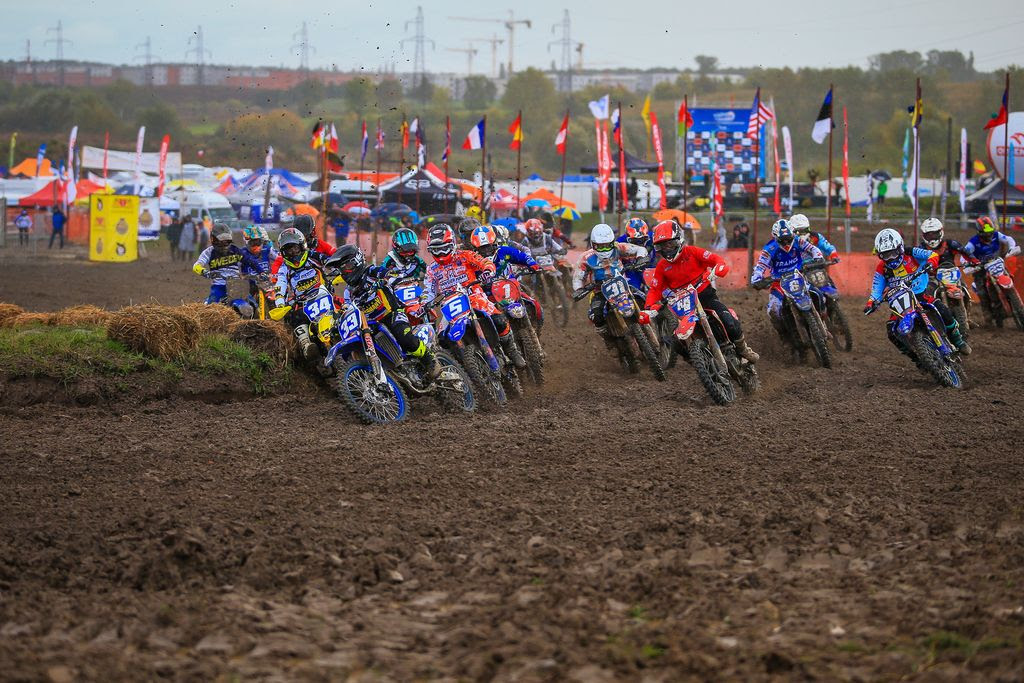 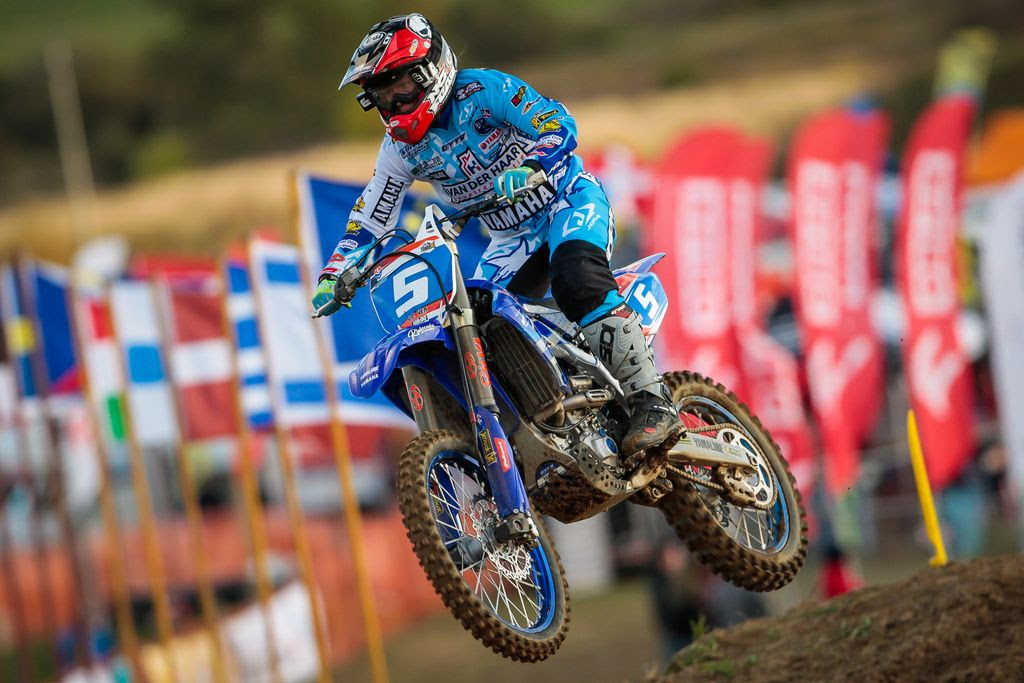 The day was concluded with the podium ceremony, which saw Team Italy defend their title and be crowned the champions of the 2019 Motocross of European Nations with Team Spain joining the second on the podium and Czech Republic in third.

Each team was awarded with trophies and medals, with the overall winners also taking home a golden plate.

In WMXoEN class, it was Team Netherlands who stood on the first step of the podium, followed by Team Germany in second and Team Denmark in third.

Morgan Lesiardo for Team Italy:  “It’s been a really good weekend for us, the track was rough so it was really hard for us, but we are happy that we win again, we get to keep the red plate on the bikes so I think we are very proud to win for Team Italy”.

Nancy van de Ven for Team Netherlands: “From the first training when I went on to the track, I felt really good. We had a really good start position for the races, which meant we could start in front. I managed to go out and win both races and also my team-mate did really good, so we came here to get the title and we didn’t go for less this year”.