One down, two more to go, as the FIM Motocross World Championship continues the fun in the sand, here in Lommel, Belgium, for round 14 of the series, the MXGP of Limburg!

Things will be interesting over the next two days, as we reach the closing stages of the EMX250 and EMX125 Presented by FMF Racing championships here in Lommel. The round of Limburg tomorrow will see the final round of the 250 European Championship and there is no doubt that Husqvarna Junior Racing Maddii rider Mattia Guadagnini will be pushing until the very end to steal the title from Thibault Benistant of Hutten Metaal Yamaha Racing who leads the championship by 24 points heading into the races. Benistant will only need to finish at least one position ahead of Guadagnini in the first race to secure the championship. Meanwhile Rockstar Energy Husqvarna Factory Racing’s Kay De Wolf is comfortable in third position.

In EMX125 Presented by FMF Racing, Fantic Racing’s Andrea Bonacorsi could also claim the title tomorrow as well, as he enters the races with a 44-point advantage to RFME GasGas MX Junior Team’s David Braceras who is second and Meico Vettik who still has a chance to go after that second spot in the standings, as just 12 points separate the pair with two rounds remaining.

Following his second consecutive GP win in the deep sand of Lommel, Team HRC’s Tim Gajser will no doubt be looking to do the same on Wednesday. Following yesterday’s races, the Slovenian has now doubled his championship lead to 48 points over Antonio Cairoli of Red Bull KTM Factory Racing, who had a tough two races and finished the day 9th overall. Of course, the Italian will be keen to make up for lost ground, in terms of the championship, at a circuit which he has been successful at several times before.

Gautier Paulin of Monster Energy Yamaha Factory Racing impressed many yesterday, as he took his first race win since Valkenswaard 2017. The Frenchman also revealed that he had been struggling with a back injury this year, which came as a shock to many in the paddock. This was an incredible achievement and now with that confidence and motivation boost of the win and the podium finish, it will be good to see what Paulin can show us on Wednesday and Sunday.

The battle is also heating up between Red Bull KTM Factory Racing’s Jorge Prado and Jeremy Seewer of Monster Energy Yamaha Factory Racing, as the pair are currently tied on 429 points for third in the championship. With five rounds remaining, both will be keen on finishing the season off with a medal, and hopefully add some more race wins and even GP victories to the mix.

Missing from the MXGP of Limburg will be Standing Construct GasGas Factory MXGP’s Glenn Coldenhoff, who after a nasty crash in the MXGP time practice session, suffered three vertebrae compression fractures. Thankfully, the GasGas rider felt movement in his body.

Marchetti Racing Team KTM’s Brian Bogers had a strong ride yesterday, as he consistently battled within the top 5, even going on to score a 4th place finish in the opening MXGP race. The second race was a bit tougher for the KTM rider, though he still finished in 6th overall on the day, with more can be expected for the upcoming races.

And of course, the next few GPs will be important for the home riders, such as Clement Desalle of Monster Energy Kawasaki Racing Team and Jeremy Van Horebeek of SR Honda Motoblouz, as they all reach for top positions. 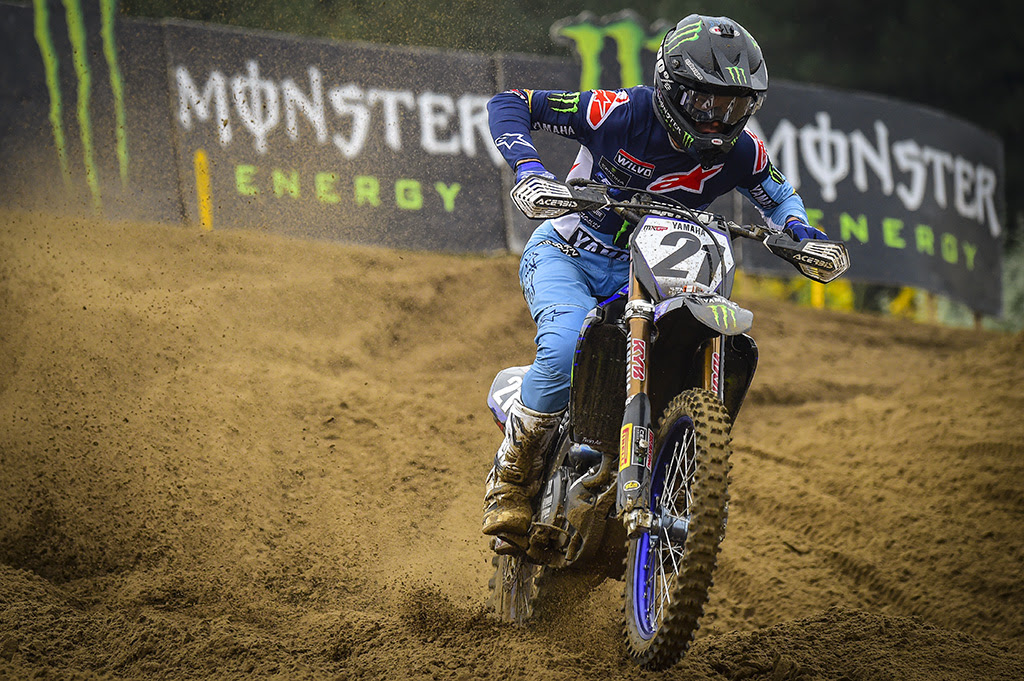 In MX2, it will be interesting to see if Monster Energy Yamaha Factory Racing’s Ben Watson can repeat his success from yesterday and add another race win and a third podium finish, as he looks to end his MX2 career on a high. And those things can be expected from the Brit, who looked incredibly strong on track all day, and was the fastest rider of the day, after setting a lap time of 2.05:428 on the third lap of race one.

His teammate, Jago Geerts, will aim for a clean run at his home track on Wednesday, to go after the top spot of the box and maximum points, which is exactly what he needs to catch Red Bull KTM Factory Racing’s Tom Vialle who leads by 53 points. Though Geerts worked hard on his set-up during the races on Sunday and revealed that by the second race, which he won, he was feeling great; this is a very good way to enter the next lot of races.

For Vialle the starts, as always, were on point on Sunday, though during the races he struggled to hold on to the lead in both heats which was the main issue. Despite that though, his consistency paid off as he took to the top step of the podium for the sixth time this season. It was a special victory for the Frenchman who has been getting stronger in the sand throughout this season.

Meanwhile the chase for the third spot in the championship standings, same as in MXGP, are very close in the MX2 category. As it stands Yamaha SM Action MC Migliori J1 Racing’s Maxime Renaux and Rockstar Energy Husqvarna Racing’s Jed Beaton are tied on 407 points, so the next few races will be important for the pair. Both have been running really well recently, comfortably battling within the top five which has really made things interesting.

Isak Gifting of DIGA PROCROSS GASGAS FACTORY JUNIORS has been impressive lately. He moved from the EMX250 Championship to finish the remainder of the season in MX2, and so far, his results have been really good. During the last five GPs, the Swedish pilot has consistently battled in the top 10, in fact he has finished inside the top 10 in 8 out of 10 races. He was 8th overall during the Monster Energy MXGP of Flanders, so it will be good to see him continue this positive streak into the next races.

And of course, Rockstar Energy Husqvara Factory Racing’s Thomas Kjer Olsen and Roan Van de Moosdijk of F&H Kawasaki Racing will make things interesting during the next few races. Olsen is on the rise following a slow start to the season with injuries, while Van de Moosdijk will want to show off his skills in the sand and aim for fifth podium of the season.